I’d say there isn’t a single historical area with a larger “wow” factor than Angkor Wat. There may be monuments that are almost out-of-this-world spectacular. However, what sets Angkor Wat apart is the sheer size and number of buildings that are out-of-this-world spectacular. In case you haven’t been (which I guess is why you are reading this), imagine the Taj Mahal (which is so iconic that probably most people have it in front of their eyes) and then imagine a large area with literally dozens of Taj Mahals in different shapes and forms all over the place. That could come close to Angkor Wat. Granted, most buildings aren’t in as great shape as the Taj Mahal but you get the idea.

Neglected and off limits during the regime of the Khmer Rouge, Angkor Wat has only gotten back on the tourist map in the late 1990s. But the real surge in tourism only started around 10 years ago. I visited off-season in 2009 and while crowded, the tourist numbers where nowhere near to what I experienced this year. If you haven’t been, go now or wait until the authorities implement some kind of crowd control measure (Machu Picchu for example does a fairly good job at this). 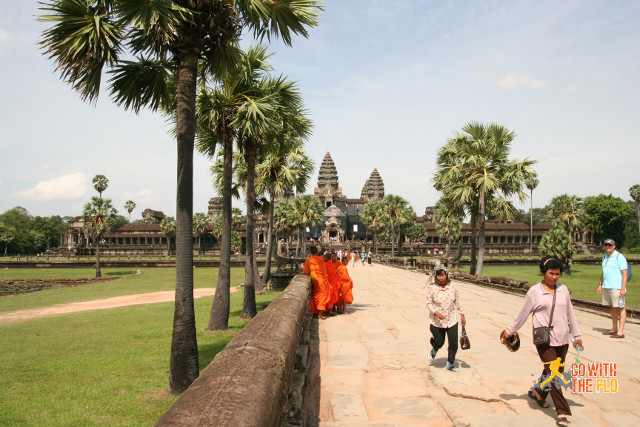 Take my advice and go during off season. The weather might be very hot and humid and it might rain (actually it should as otherwise the farmers will suffer). However, by now you absolutely want to avoid the crowds during peak season. Even though the area of interest is huge, people congregate at the main temples and you end up pushing and shoving each other. Despite lots and lots of hotels being built, hotel rates surge by 20-30% and it can even be difficult to find a (good) tuk-tuk driver during high season. I’ve now been twice in July/August and would recommend it. 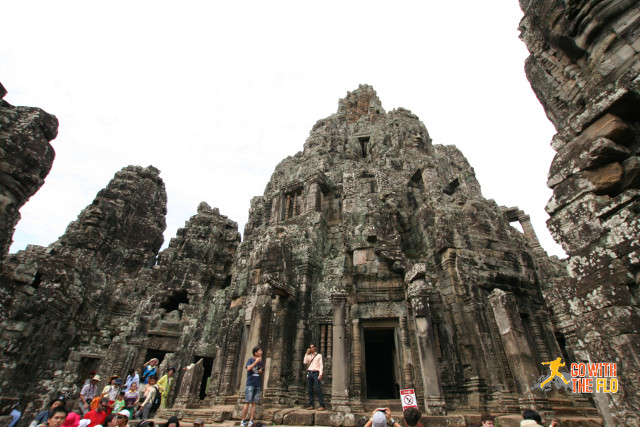 How to get there / where to stay

Back in 2009 Bangkok Airways still had more or less a monopoly to Siem Reap airport and we travelled overland. Although it was exciting at the time, it is not a particularly scenic drive and I wouldn’t do it again now that low-fare airlines fly into Siem Reap (the town whose sole reason for existence seems to be the temples of Angkor Wat). Hence unless you feel particularly adventurous (if coming from Thailand) or coming from Phnom Penh, just fly. The airport is around 20 minutes outside of town on National Highway 6 and it is easy and quick getting into town.

There are hundreds of accommodation options and you know where to get your recommendation on the internet. In terms of location, you can either stay fairly close to the “centre” of Siem Reap (with its restaurants, bars and markets), along Highway 6 (which is basically just the main road of the town) or along the road towards the temples. Even though not all is walkable, it doesn’t matter so much where you end up since tuk-tuks are everywhere and cheap (round US$2 for a trip in the city).

How to approach your visit to the temples

First of all I’d say that less than two days don’t do the temples justice. Other large religious sites, such as the temples of Hampi in India or Prambanan on Java, can be visited in one day if one wants to. In Angkor Wat this would be a bad idea – the number of breathtaking temples is just so large and the variety so big that you’d not want to squeeze everything in one day but instead buy a three day pass (US$40).

There are various options to visit the temples, ranging from renting a bicycle, to hiring a tuk-tuk or a proper car. All options you can do with or without a guide. In both my visits I rented a tuk-tuk without a guide and do it again this way for a number of reasons: 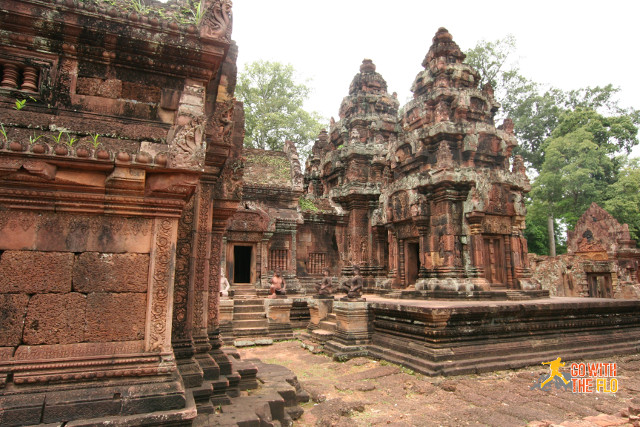 Banteay Srei, slightly further away from the rest

How to find a tuk-tuk driver

Don’t worry, you won’t have to search for them – they will find you. There are hundreds of tuk-tuk drivers, waiting along every road of Siem Reap. You’ll be offered a ride every five meters at least. Often people end of taking a tuk-tuk inside Siem Reap and end up sticking with the driver for the rest of their visit if they like them.

I did this during my first visit. While the driver spoke very little English and made excessive use of the tuk-tuk’s horn, he was reliable. This year I went with the recommendation of a friend and booked a driver beforehand. There are also some savvy drivers who have gone to Tripadvisor or built their own websites. While you have a higher chance of knowing what you’ll get, you’ll also likely pay a premium.  The basic rate for the main temples seems to be around USD12-15 nowadays. If you want to go to the temples further away (around 30km, i.e. almost an hour drive) or want to stay longer in the evening for the sunset, you might be charged an additional USD5.

Our driver, Mr. Pheng Kunthea (his contact details can be found at http://www.angkortuktukdriver.net) , charged us US$45 for a two day tour that went to the temples further away as well stayed with us to see the sunset. Stay tuned for a post on our tour. He was reliable, friendly and spoke English well. Don’t expect a tour guide for the money however. 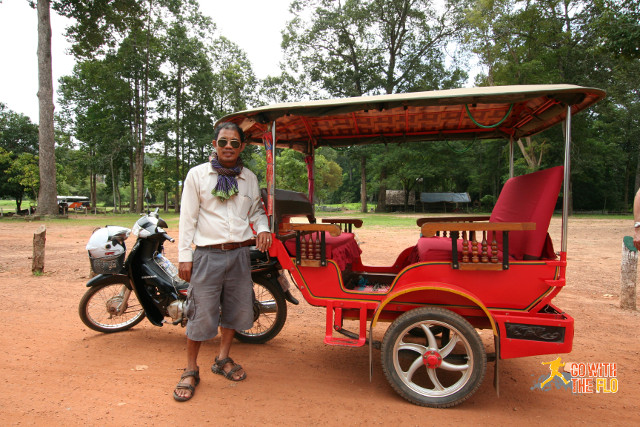 Our ride for the two days

If you haven’t been, start planning your visit! If you have any advice for seeing the temples, please feel free to share in the comments.