Our visit to the Temples of Angkor Wat

As previously described, a visit to the Temples of Angkor Wat is a breath-taking experience and definitely worth it. Don’t expect an authentic present-day Cambodian experience since Siem Reap is probably the most developed city in the country and far ahead in terms of economic situation due to the very strong tourism industry.

While we read up in our guide book, we let our tuk-tuk driver plan our visit. After all, he has been doing this nonstop for over 10 years and chances are he knows what tourists want to see. I won’t go into the details of each temple here. We read up briefly in the Lonely Planet before visiting each temple and then had a more thorough book (Ancient Angkor by Michael Freeman) to read up in our hotel room. To us it seemed like to best way to soak up the awesomeness of the temples without being overloaded with information and then learning more where we where truly interested later on.

Our first stop was Pre Rup. 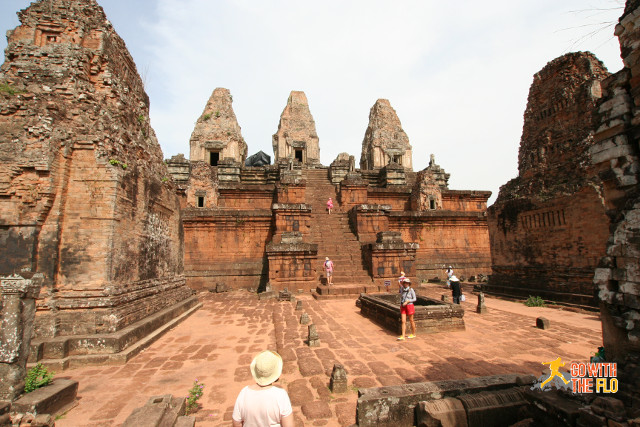 Which was sort of on the way to our next temple, Banteay Srei. This temple is a bit further away from the bulk of the other temples, around 30km and it took us almost an hour to get there. The temple is famous and worth visiting for being in relatively good shape and the intricate rock carvings. 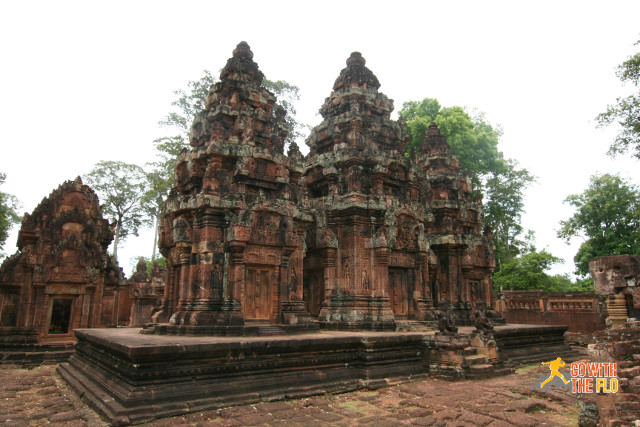 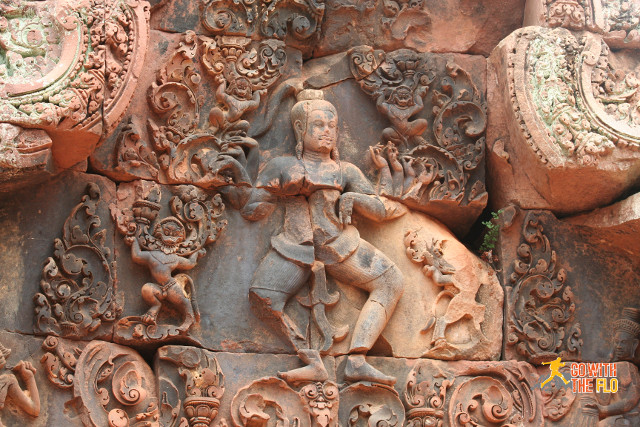 We then drove back and had lunch (overpriced and nothing to write home about) before heading to Banteay Samre. 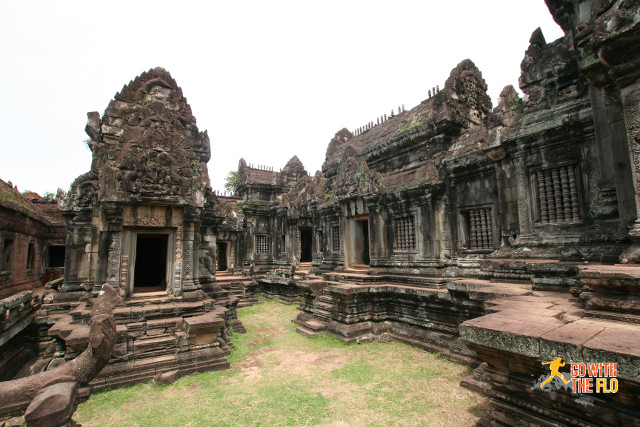 Just look at the amount of rocks that had to be carried here for the construction! 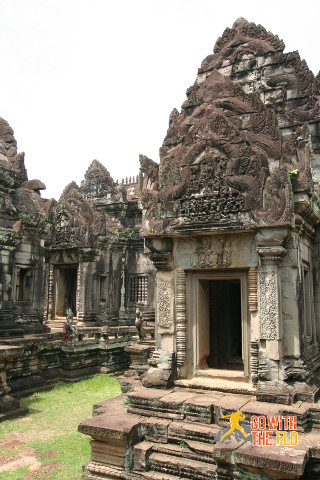 The highlight of the day then had to be the mighty Angkor Wat, the largest religious building ever constructed: 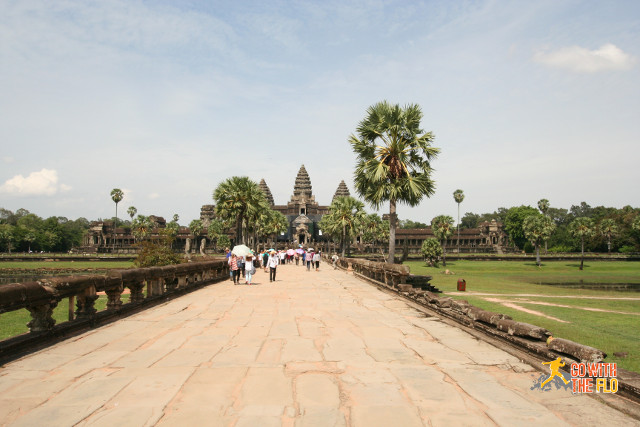 Angkor Wat can be seen from far away due to its characteristic five towers. 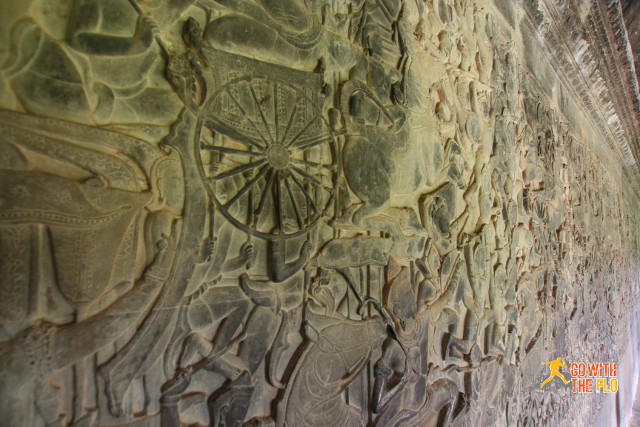 Rock carvings along the walls of Angkor Wat – amazing artwork

Nowadays you can climb up to the towers (this wasn’t possible during my last visit in 2009). 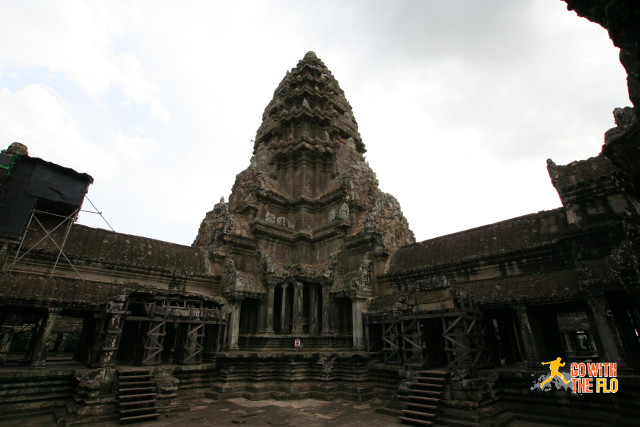 One of the five towers 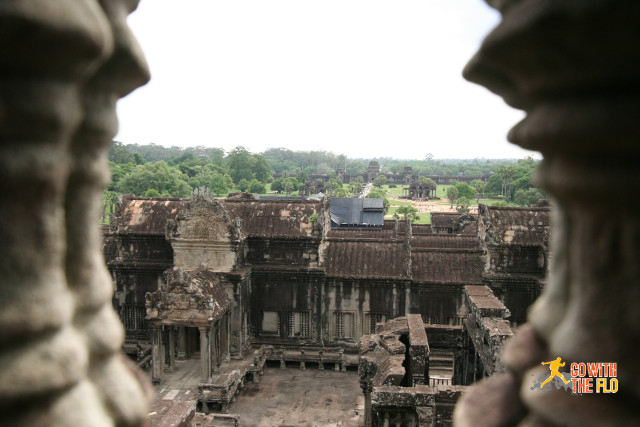 View from the top towards the main gate 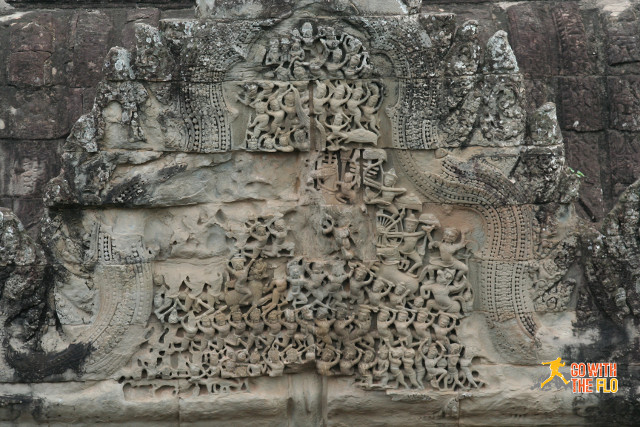 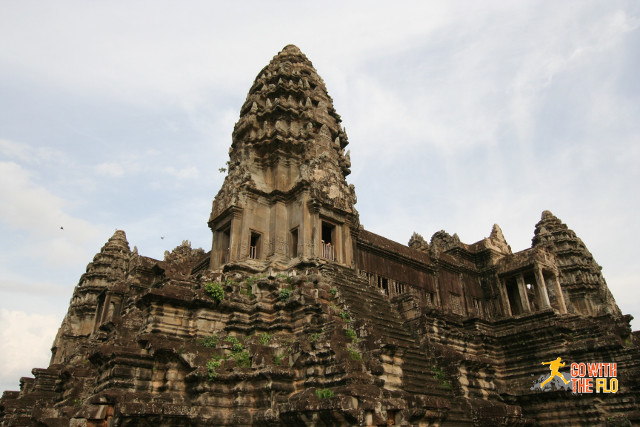 Outside view of one of the towers 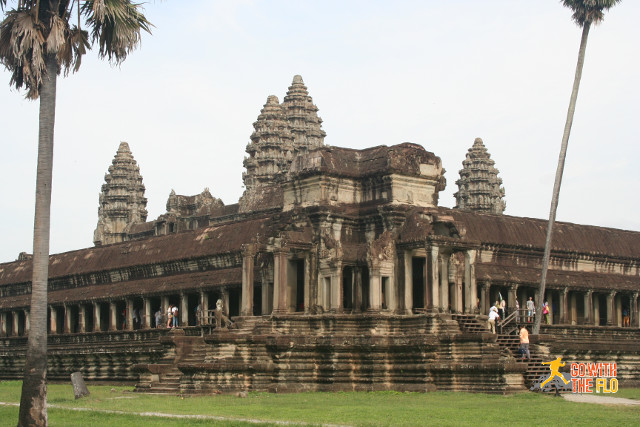 Four of the five towers shortly before sunset.

Initially we wanted to watch the sunset just across from Angkor Wat but then decided to climb up Phnom Bakheng (a temple on a hill) where I had watched a great sunset in 2009. Bad idea in 2015. The crowds have gotten so massive that we queued for an hour and then missed the sunset. At least we still got a glimpse of Angkor Wat: 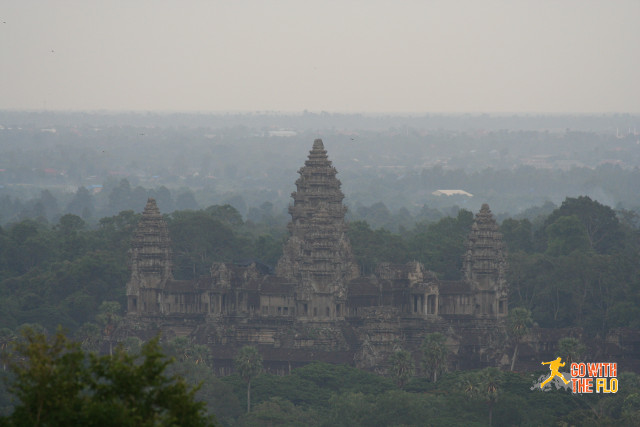 The walk up the hill takes around 15 minutes and is not too difficult. Alternatively you can take an elephant for USD20. 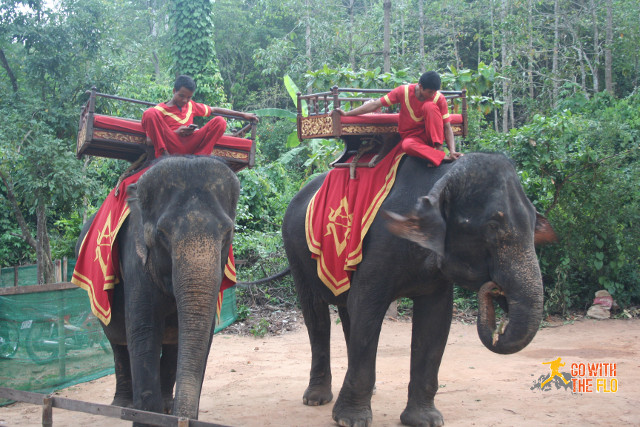 This was it for day one and we were happy to head back to our hotel and for dinner before meeting up with our driver again the next morning.

Since I only had half a day left we tweaked the tour to include as many highlights as possible, namely Angkor Thom South Gate, Bayon, Baphuon, Royal Enclosure & Phimeanakas as well as Ta Prohm.

First stop was the South Gate leading to Angkor Thom: 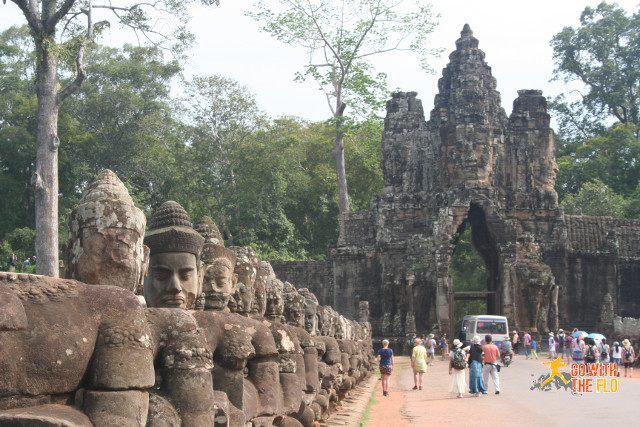 Bayon was our next stop: 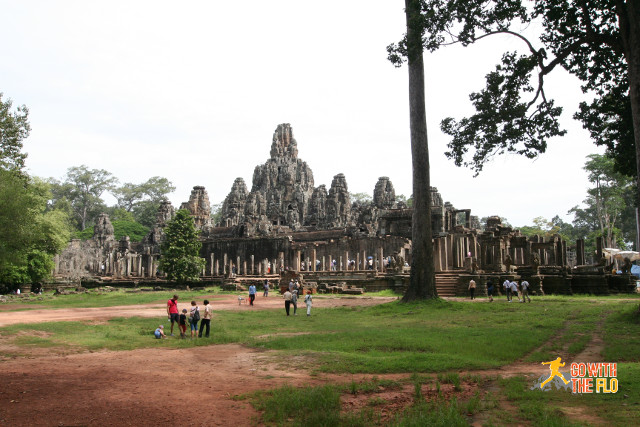 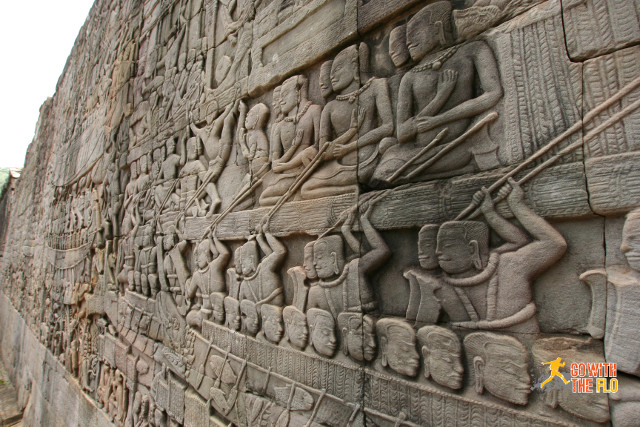 Tales carved into the rock 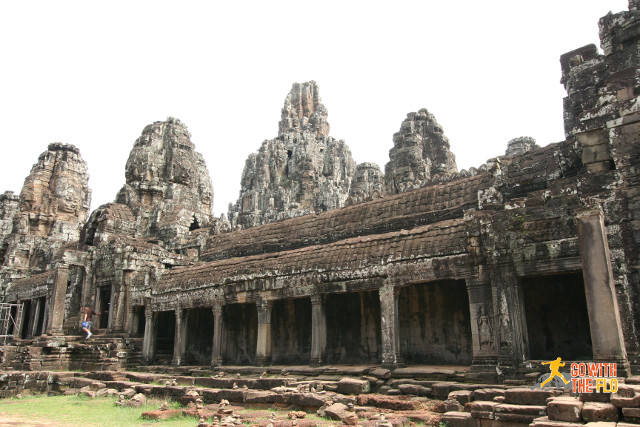 Again breathtaking how many rocks had to be carried here 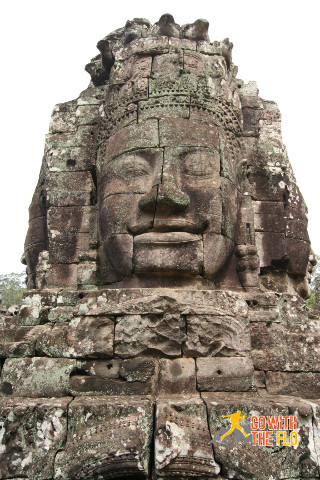 Characteristic for Bayon: the many faces (over 200) carved into the rock 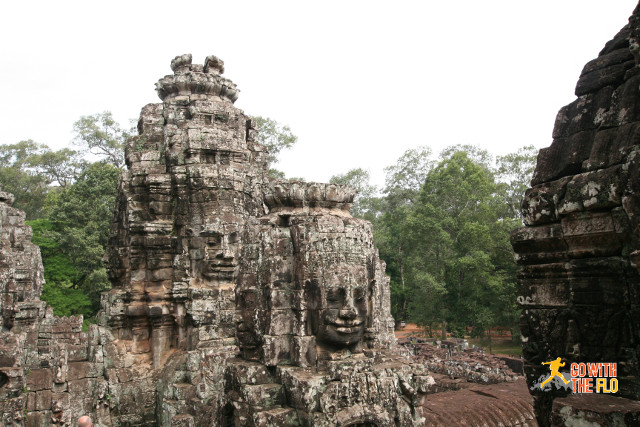 Around there corner we then visited Baphuon. Again a completely different style as this temple reminds you of a pyramid: 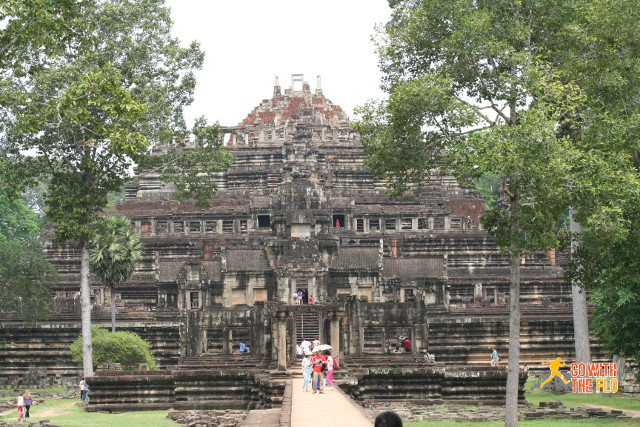 You can climb up all the way to the top where you’ll find a mini-pyramid: 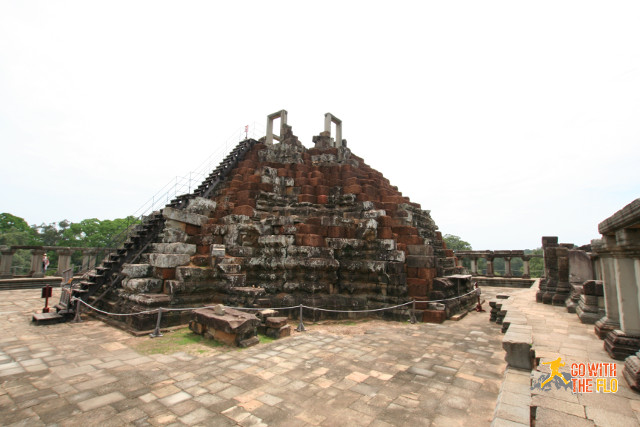 At the top of Baphuon

Last stop, and another highlight, was Ta Prohm – famous from movies as it is characteristically overgrown by trees: 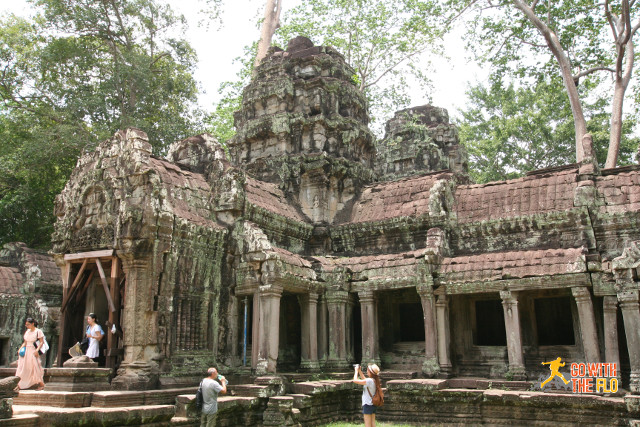 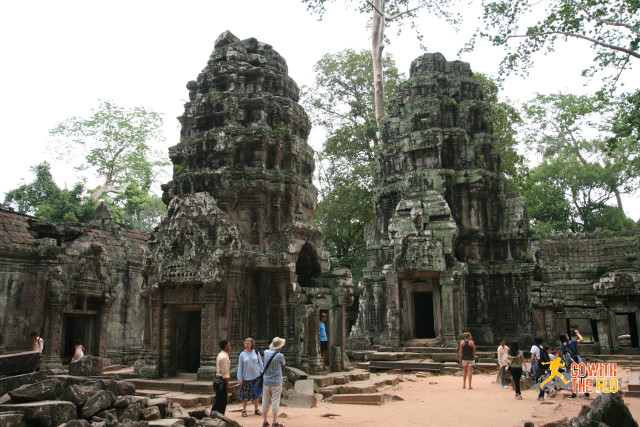 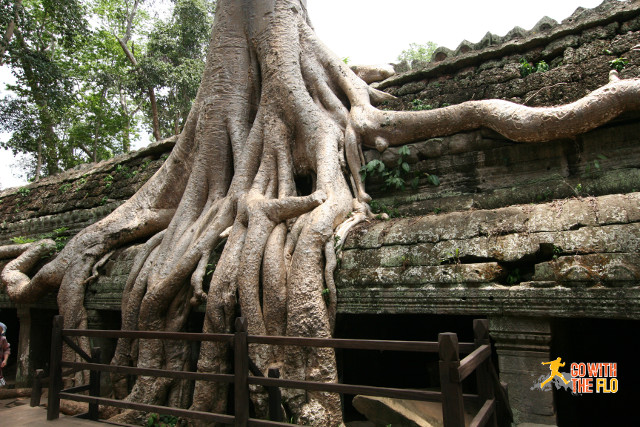 Nature has clearly left its mark 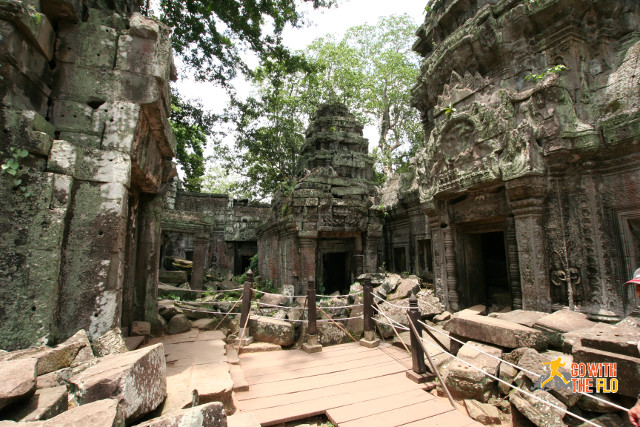 A very unique atmosphere inside this temple 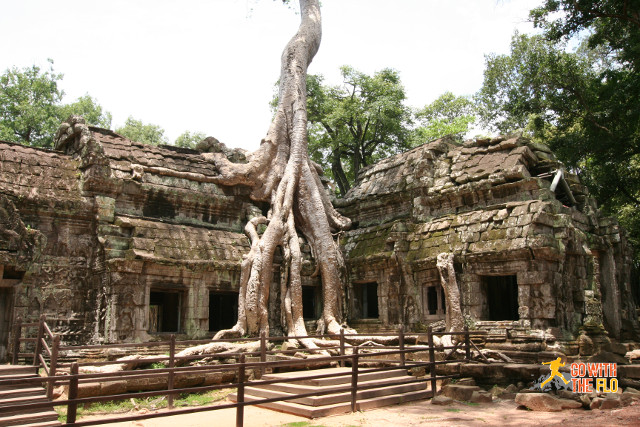 Since my last visit in 2009 they have quite of bit of restoration in certain areas. For example this structure was still mostly collapsed at the time: 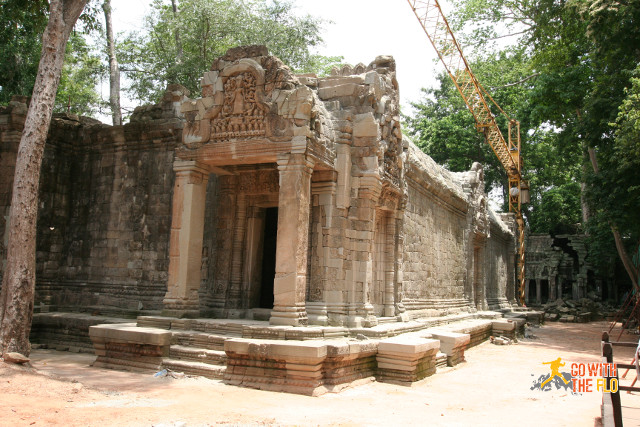 Since noon was approaching, we had a quick bite to eat before I headed out to the airport. The park is actually on the way to the airport from the city so if you managed to take your luggage with you in the tuk-tuk you could save some time.

The 1.5 days inside the park were a bit too short. There were a couple of temples I would have liked to visit as well or maybe see Angkor Wat again during a different time of day. All-in-all it was a fantastic visit and apart from the increasing masses of tourists, there is absolutely no reason not to visit!