Experiment: Ordering a taxi in Thai with Google Translate

I’m off for a weekend in Thailand soon, this time off the beaten path apparently. After booking the hotel I enquired with them for a taxi for the transfer from the airport. No reply to three e-mails. Please cross your fingers that the hotel is actually still in business.

After a bit of googling, I nearly gave up on finding a taxi but figured that due to the late night arrival, I’d probably just get ripped off if not pre-booked. The airport sees four international arrivals a day in addition to two or three domestic arrivals. So taxis won’t exactly be around in abundance, especially not for the last flight of the day.

So I resorted to the Thai version of Google with the help of Google Translate. I eventually found a few phone numbers of supposedly taxi drivers in the area. I drafted a simple message in English and had Google translate it for me into Thai script. Lo and behold I actually got a reply through WhatsApp a few hours later (odd since WhatsApp is rarely used in Thailand – Line is the messenger app of choice). From there a conversation in Thai started about price and destination. He would write, I would translate into English and then translate my reply back into Thai.

Let’s see – if Google Translate served its purpose, I’ll meet my WhatsApp taxi driver tomorrow at the airport with a prearranged destination and price. Stay tuned, I’ll report back. 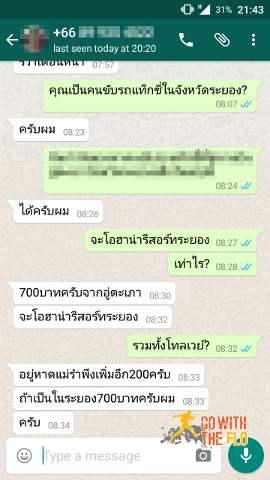 WhatsApp conversation in Thai thanks to Google Translate