The currency exchange market in Uzbekistan

Officially, one US Dollar is worth 2’900 Uzbekistani Som. Inofficially currently around 6’400 Som. There are various reasons for it and I recommend reading some articles on the topic of you are interested. But basically the government doesn’t let the currency free-float which causes the official exchange rate to be massively over-rated. Locals can practically not buy dollars anymore at the official exchange rate and need to resort to the black market if they don’t trust their local currency.

While this is very bad news for locals, it is good news for tourists because exchanging on the black market will get you more than twice as much for your dollars.

Keep in mind that exchanging money on the black market is technically illegal and the below experiences are not from me but from Swim (someone who isn’t me).

When Swim arrived at Tashkent airport, he needed a bit of local cash. Swim knew about the black market, so wanted to wait to exchange large amounts of money but instead just exchanged EUR20. And the rate was as bad as expected – around 3’300 Som to the Euro.

The next day in Nukus, Swim went to the local bazaar and asked around for dollar, dollar. Not long until he was directed to the minibus parking lot where a couple of gentlemen with large black plastic bags approached him. 6’300 he was told and had three stacks of money. 100×5000 Som, 100×1000 Som and 60×500 Som bills. The first USD100 bill was exchanged to 260 local bills. Another USD100 soon followed. Nobody cared that Swim took all the time in the world to count each stack of money. And a good thing that he had a bag with him as there is otherwise no way to carry so much cash. Literally plastic bags full of cash. Within a few minutes the transaction was done and what seemed very odd, Swim quickly realized that this is the most normal thing in the Uzbekistan. 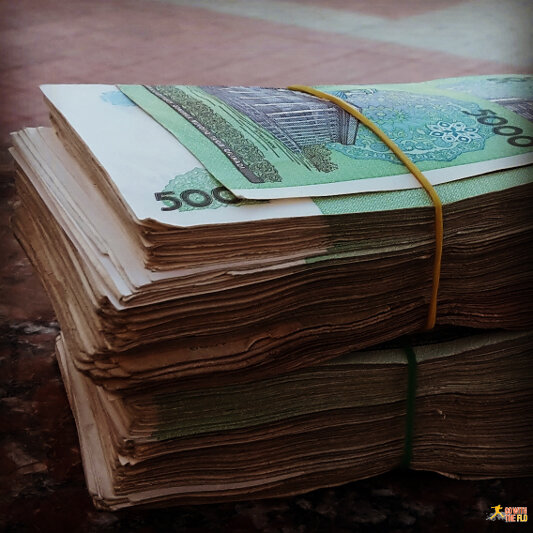 Swim exchanged another USD100 in Bukhara at the Bazaar. He was first a little bit worried about the police presence but there are rumors they are in on the deal and get a cut. In Bukhara they wanted to give him all in 1000 Som bills – yes, that would make 630 bills. Swim asked for 5000 Som bills and gladly accepted a slightly worse exchange rate for less paper.

If you feel uncomfortable exchanging at the bazaar, just ask any hotel or tourist shop. Most people are willing to help – they’ll make a small cut on the exchange rate.

In summary – if you’re going to Uzbekistan at the moment, you’ll be confronted with the black market rate sooner or later. Check this website before you go to get an idea of the current exchange rate (blocked inside Uzebkistan).