After a couple of relaxing days around Bajawa, we were ready to move on. The last day was rainy and while we enjoyed the cooler temperatures, we were looking forward to shorts and t-shirts again.

As outline in my introductory post, we opted to fly from Bajawa to Labuan Bajo as opposed to splitting up the trip in two long drives (with a night stop in Ruteng). The only reason why I was initially hesitant was because I was considering visiting the most characteristic Manggarai village of Wae Rebo. 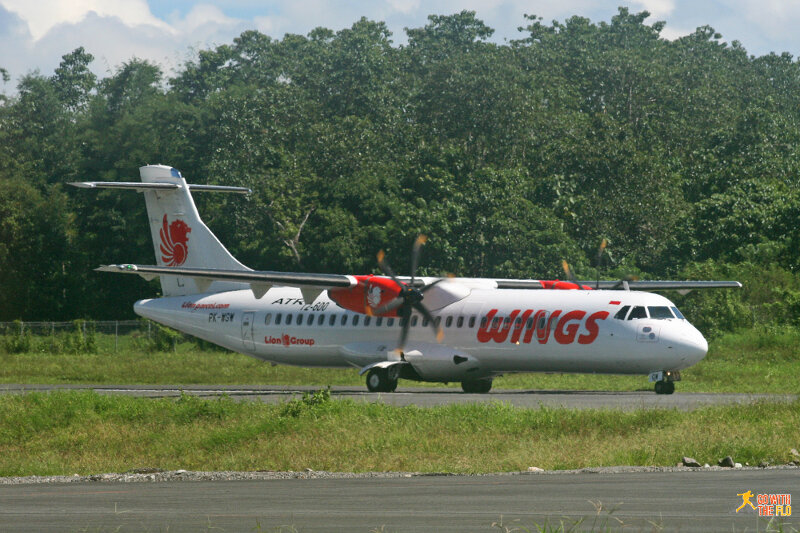 Our ride from Bajawa (BJW) to Labuan Bajo (LBJ)

Somehow I was under the assumption that Bajawa airport would be close to the city since… well that’s what small airports are usually like. But nope – one hour outside of town. The airport was entertaining since it was so simple.

A few years ago it made national news because (quoting from the Jakarta Globe):

The district head of Ngada, East Nusa Tenggara, decided to bar state-controlled airline Merpati Nusantara from landing at Turelelo Soa airport on Saturday after he was refused a ticket on a Merpati flight that was already fully booked.

You can’t make this stuff up…

The flight was uneventful but offered nice views of the island and before we need it, we touched down at Labuan Bajo.

Aerial view of Bajawa (BJW). TransNusa Fokker 50 on the tarmac. 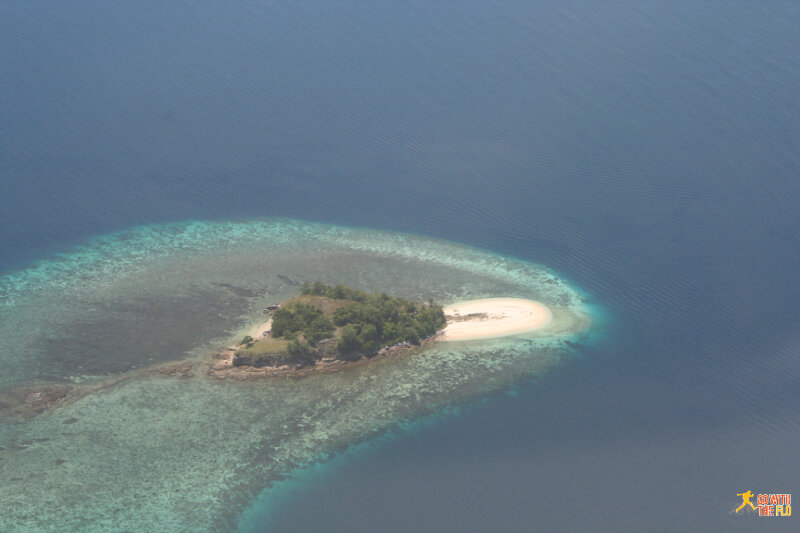 The majority of visitors to Flores only visit this city on the northwestern tip of the island and use it as a base to explore Komodo National Park. It is famous for diving and after having gotten my Open Water diving license four years ago, I thought it was time to finally again explore the underwater world. There is a large number of diving shops and it is difficult to distinguish to good from the bad ones. Luckily a friend had been there a few months ago and was able to recommend me the shop he used, so I didn’t do much further research. Komodo Dive Center is run by a German and we were fully satisfied. For 1’375’000 IDR we booked a three-dive day trip. What we got to see during those three dives was nothing short of amazing. At one spot it was just our divemaster and the two of us along with a dozen huge Manta Rays (wingspan of about 6 meters). Beyond that we saw turtles, sharks and lots of other creatures (I am not really good with name of underwater animals). My underwater camera gear is limited to a GoPro and the photos don’t do it justice. 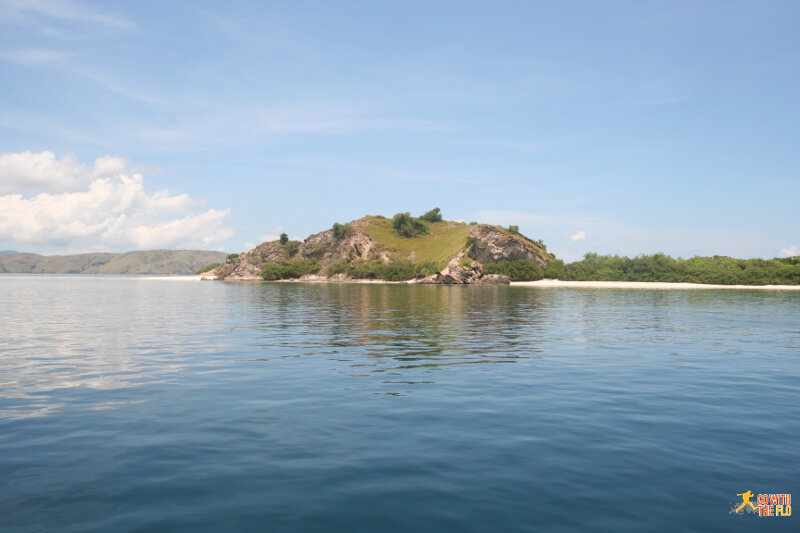 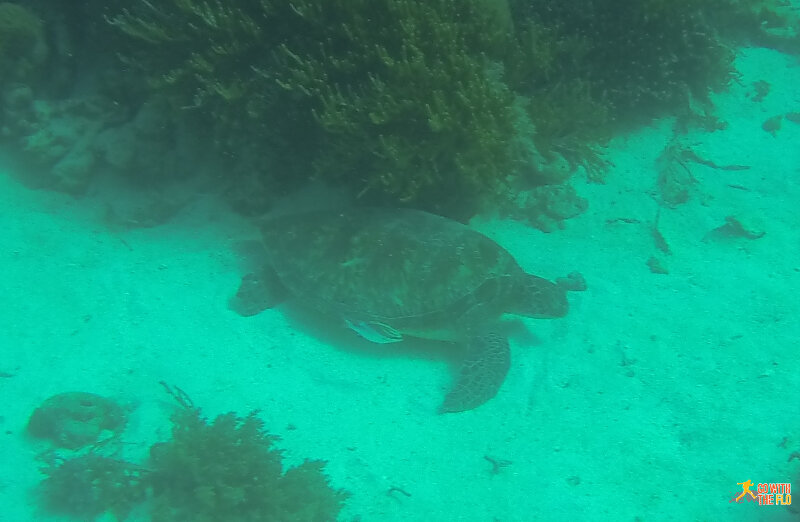 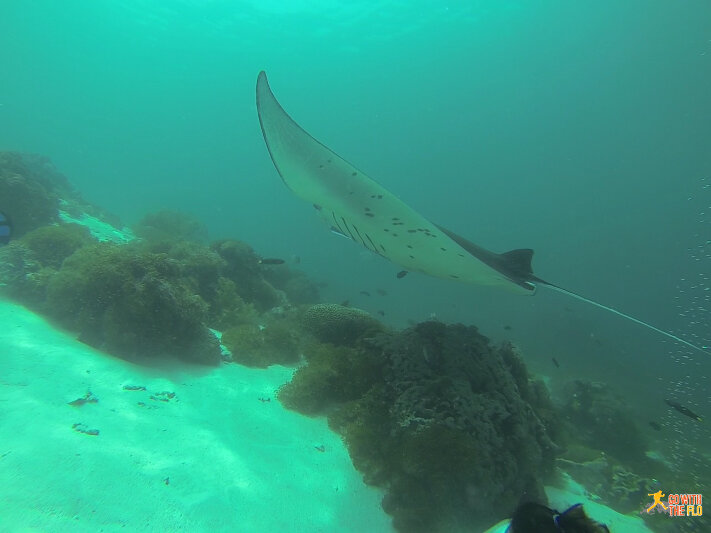 We contemplated going diving for a second day but instead decided to rent a boat and visit the Komodo dragons on Rinca island. Nearly every shop in town advertises boat trips to Rinca. Someone recommended to us to cut out these middle men and instead go to the harbor directly and strike a deal with one of the boat owners. We did that and settled on 700’000 IDR to take us to Rinca. Mr. Iwan was our captain and I can recommend him: +6281239817908.

One of the dozens of liveaboards passing us

It took around two hours on the slow boat to Rinca. Once arrived, every passenger is met by a guide and escorted to the ticket office. We were a bit surprised that nowadays each visitor is expected to pay a grand total of over 250’000 IDR in various charges and surcharges. Seems like recently the local (or central?) government decided they wanted a piece of the pie as well. Rather than making smaller slices, they decided they would just make the pie better. The ranger blamed the new fees on the “new guy” (the recently elected president). Time will tell whether tourists are still willing to pay this much. 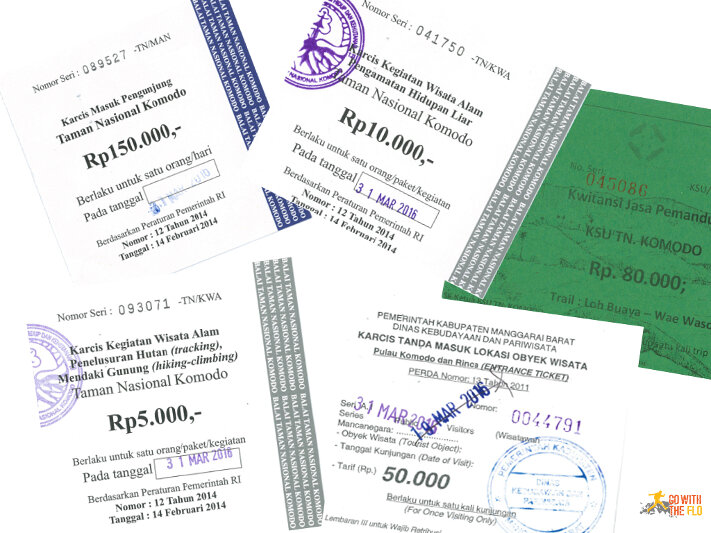 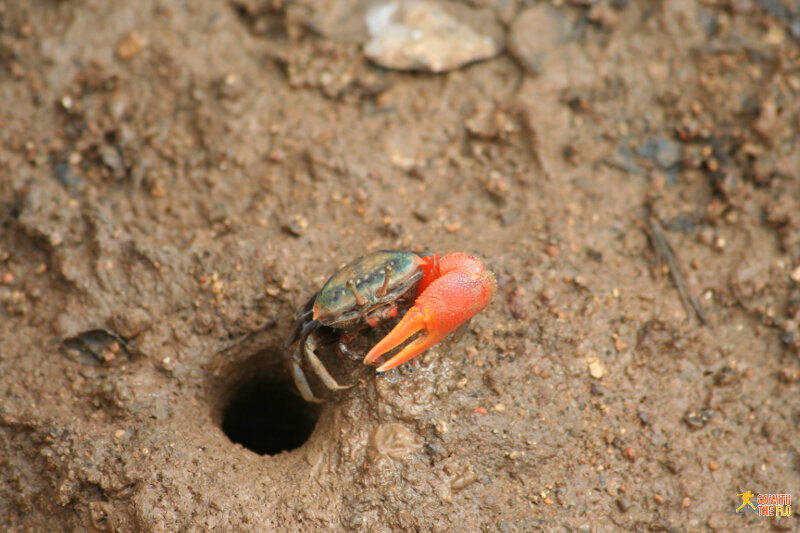 An interesting crab on Rinca Island

Rinca is more popular to see the dragons because it is closer to Flores but also chances are higher to see them. Apparently they usually hang around the kitchen of the ranger camp. Now if you’re thinking this would be because the rangers feed them, then you are wrong. Our guide told us they never feed the dragons. This was about a minute before we walked up to the kitchen and saw some rice flying out of the window and half a dozen hungry dragons going after the food. Our guide commented that “normally” they don’t feed them. Yeah, right. I think it saves the guides the hassle of taking the tourists on long walks, looking for dragons.

A gang of Komodo dragons on Rinca Island 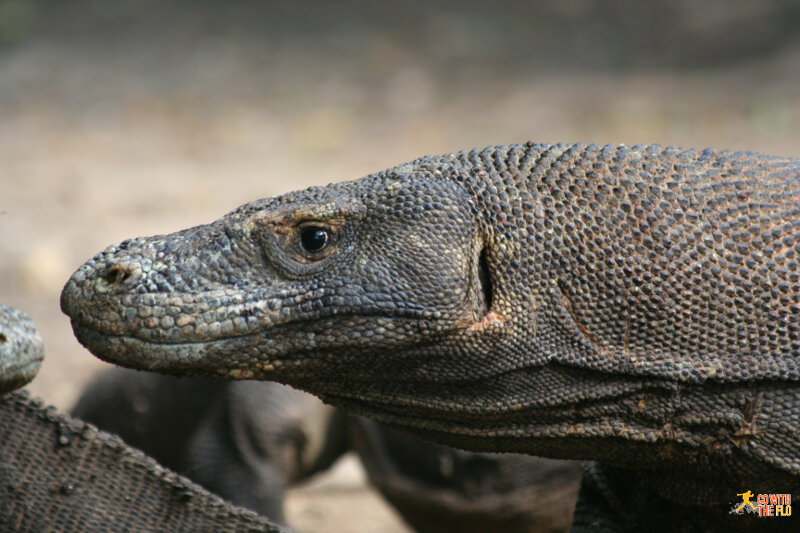 Close-up of one of the dragons

The animals are quite impressive but not really a friendly bunch. They eat each others’ babies and spend their lives as solitary animals (unless they are hanging out by the ranger kitchen).

We made a short hike up a mountain and enjoyed the view before going back to our boat and heading to Kalong Bay. 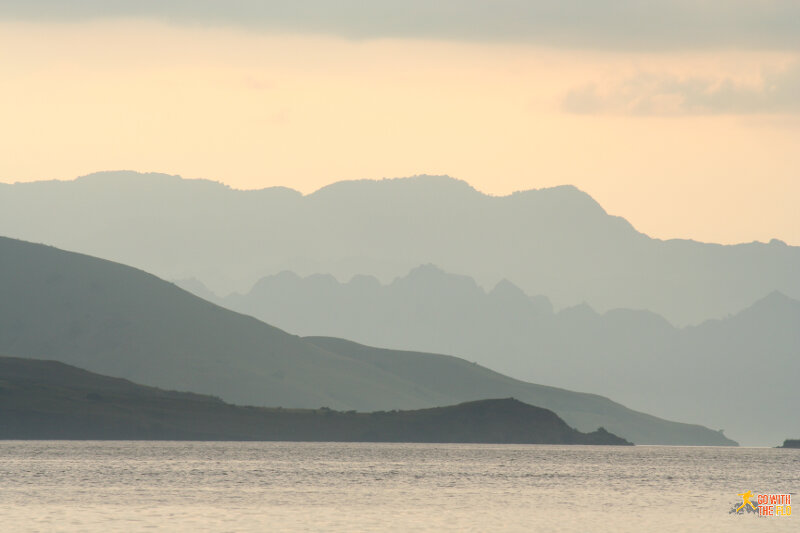 Kalong is the name for a Southeast Asian species of large flying foxes. And yes, they are large. At Kalong Bay there are several hundreds if not thousands (I try not to exaggerate) that every day at sunset start flying over to the main island of Flores to find food. They return before sunrise. Watching them is truly spectacular and should not be missed. It was difficult to get good photos because of the poor light conditions but I hope one can get an idea of the spectacle. 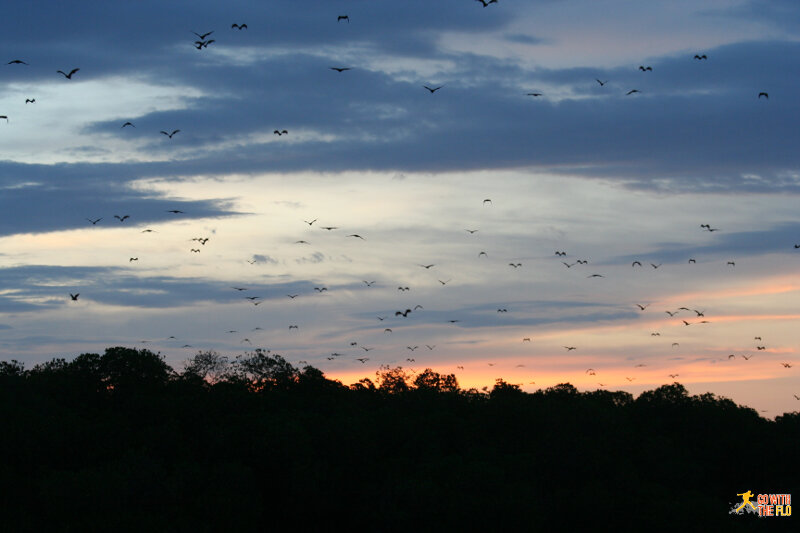 Here they start flying towards us 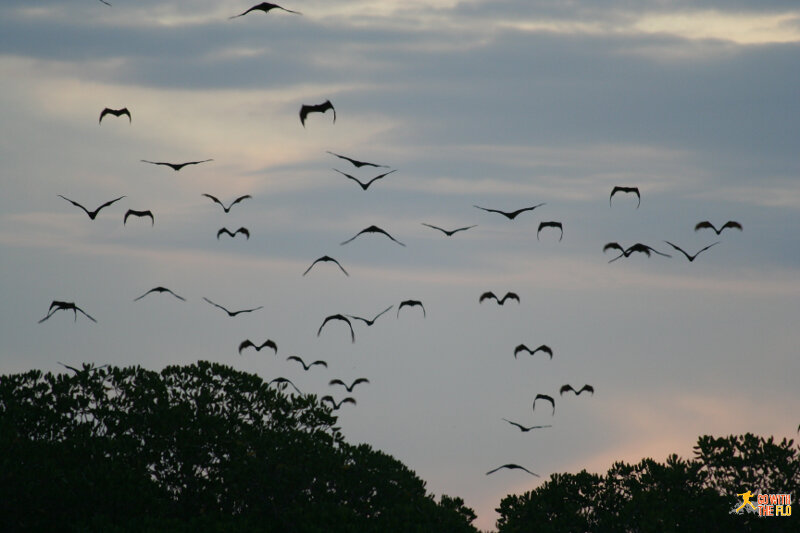 Hundreds or thousands of flying foxes 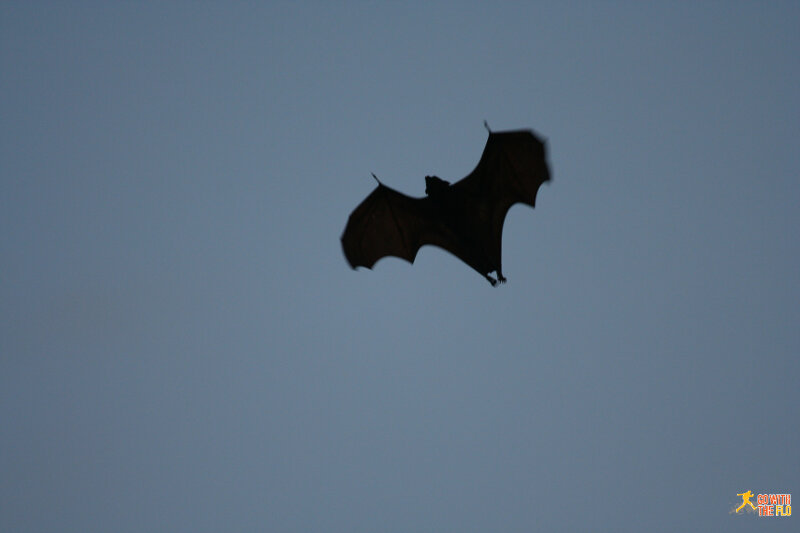 That’s one of the flying foxes flying past us.

While so far Flores wasn’t really setting new standards in terms of culinary experiences, we were very positively surprised by what Labuan Bajo has to offer. There are two Italian restaurants and truly deserve to be called Italian, a great upscale fish restaurant as well as some others that we didn’t get the chance to sample. 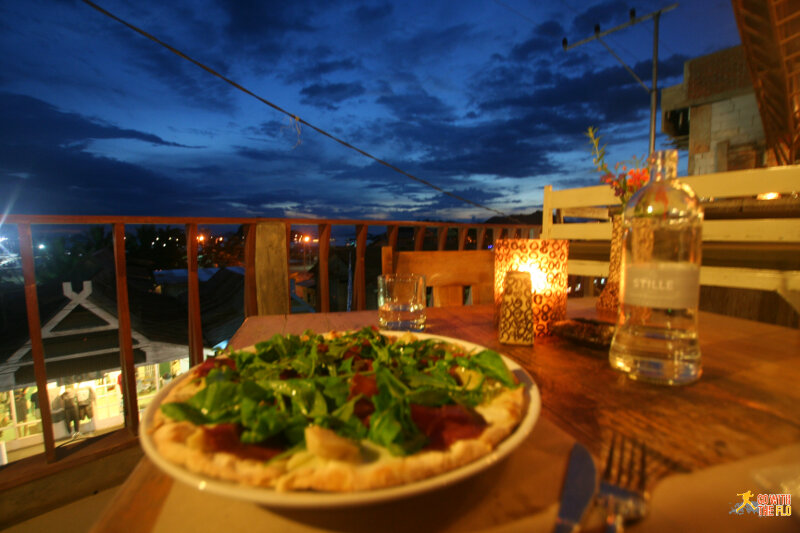 One of the better pizzas I’ve had in a while

But not only that, also the local night market is great for choosing the fish you’d like them to throw on the BBQ and grill. We went twice and ordered a fish for 120’000 IDR that easily feeds two people.

While I was a bit skeptical of spending time in Labuan Bajo (and it is indeed a ramshackle town), I found it has its charme. The sunsets are gorgeous and the food makes this a good place to come back after a day out on the water. But beware – don’t spend time during the day in the town as there is close to nothing to do or see.