Khiva: my first stop on the Great Silk Road

After visiting the Savitsky Museum, I wasn’t keen on spending much more time in Nukus. I packed my bags and headed for the shared taxi stand to get to Urgench and then Khiva. Maybe this is the right time for a few words on the transport system in Uzbekistan. It is perfectly normal to travel in shared taxis which leave as soon as four passengers are found (or someone is willing to pay for the remaining seats). Slightly odd as it seems highly inefficient to me but that’s the way things roll in Uzbekistan. Works for me.

I was lucky and when I arrived I was number four in the car. What followed was an uneventful two hour drive for less than EUR2 to Urgench where I had to transfer to another taxi that would take me in 30mins to Khiva. I was lucky again and was number four.

I did not have a reservation in Khiva but just tried my luck and checked into Meros B&B who had a lovely room left for me at USD25. In the below photo my room is just above the signboard including the balcony to the left. 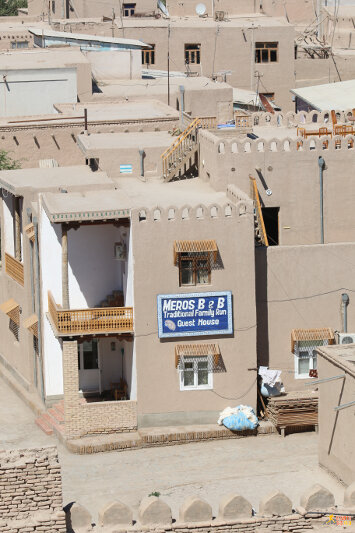 Khiva is located between the Kyzylkum and Karakum deserts and was formerly known as a slave trading post. The old city is located within city walls and is known as Ichon-Qala (meaning “within the wall”). 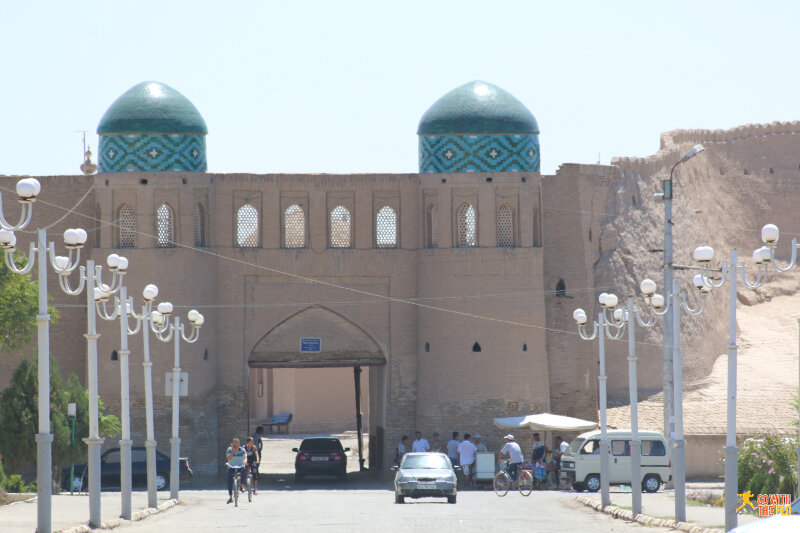 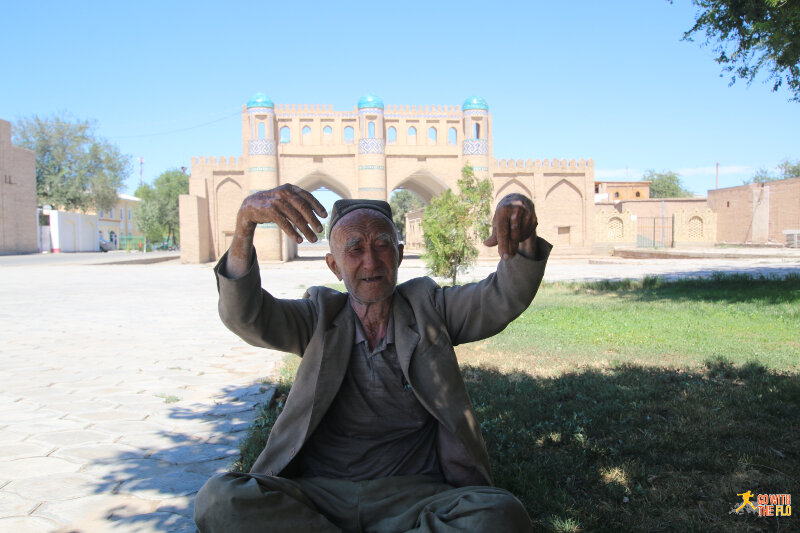 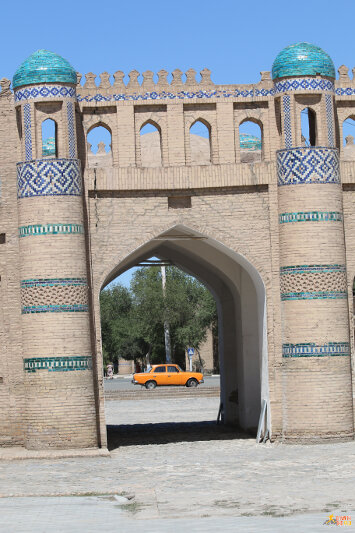 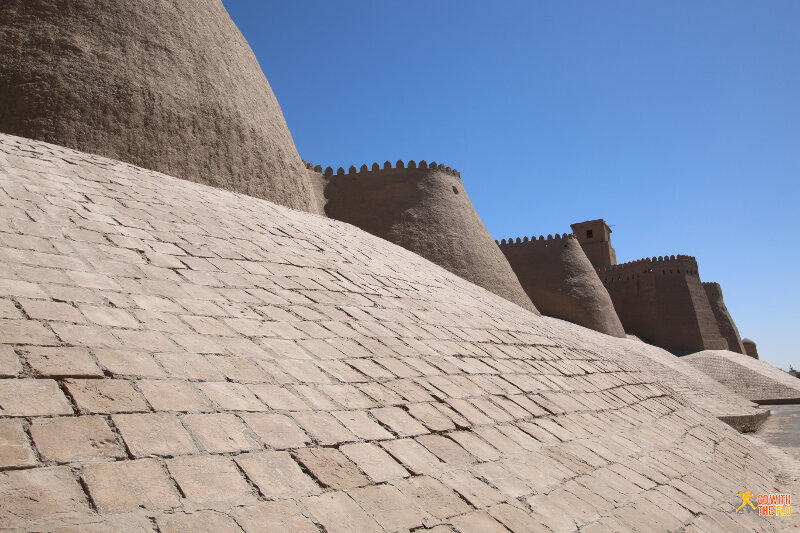 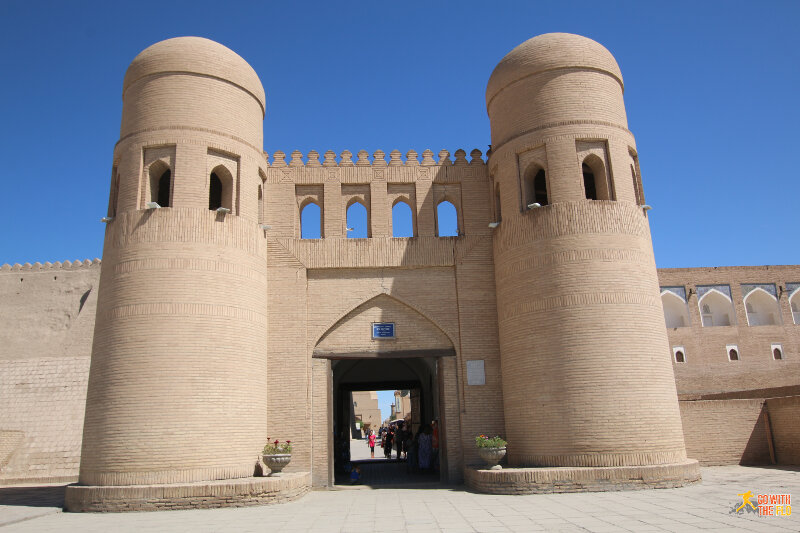 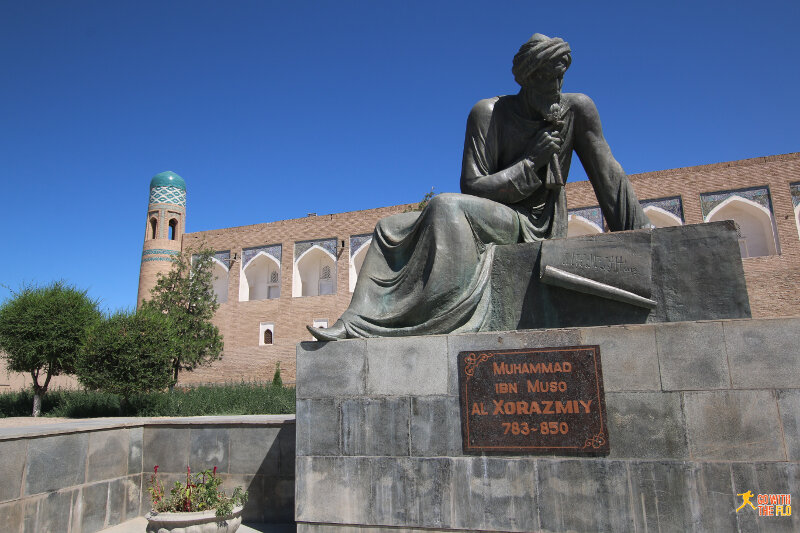 Outside the main gate

I then set out to explore the Ichon-Qala, starting out with the fascinating Kalta Minor Minaret outside the beautiful looking Hotel Orient Star. 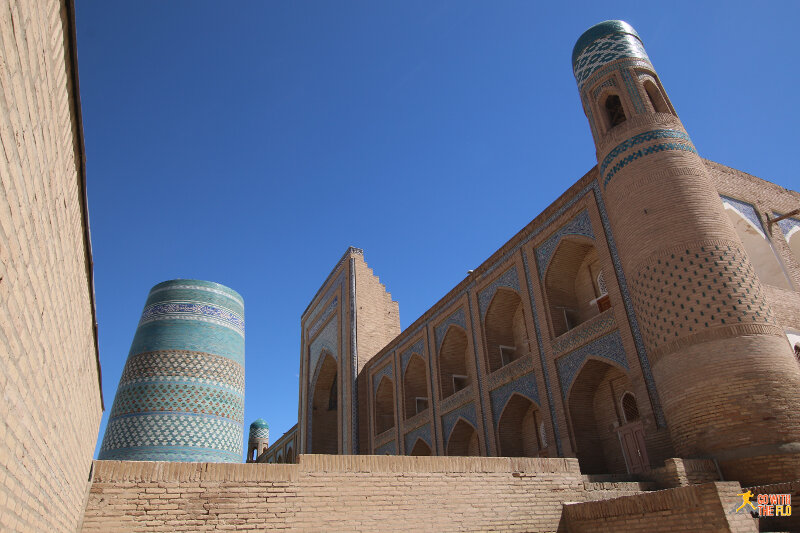 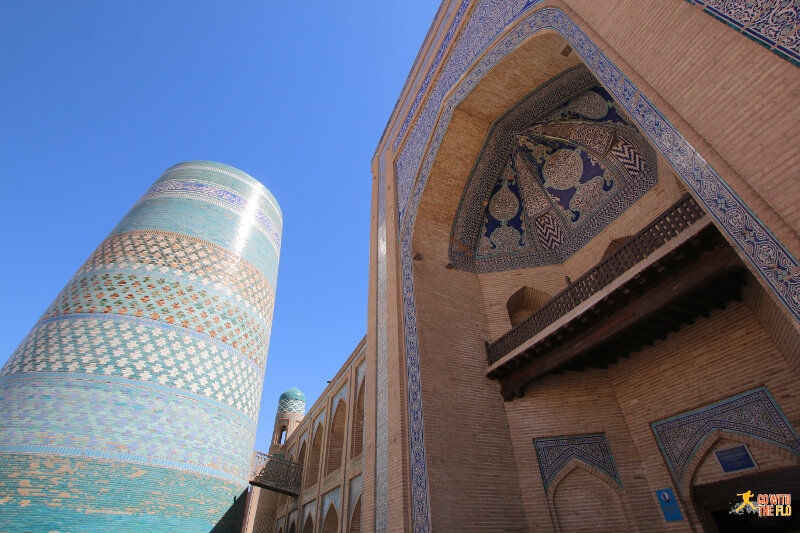 Right next to it is the Kuhna Ark, a mini fortress where Khiva’s rulers used to reside. There is watch-tower which offers great views of the Ichon-Qala. 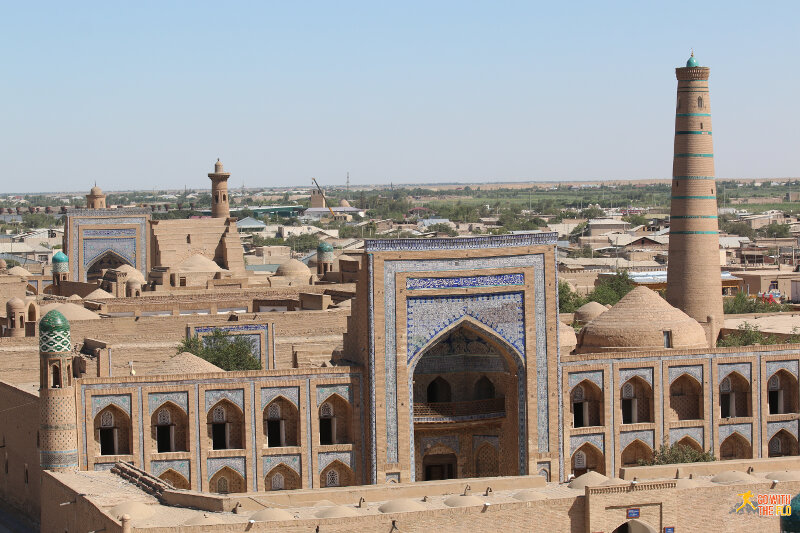 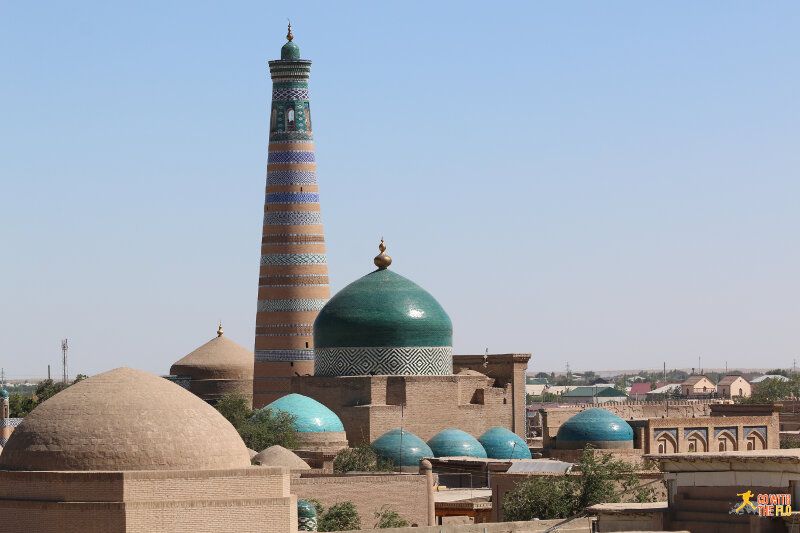 Inside the Kuhna Ark

Khiva feels like an outdoor museum, every building is in great shape and well preserved. There isn’t much local life inside the walls anymore, so it does feel a bit geared towards tourists. However when I was there there weren’t too many tourists around, so every now and then you had a medressa to yourself. 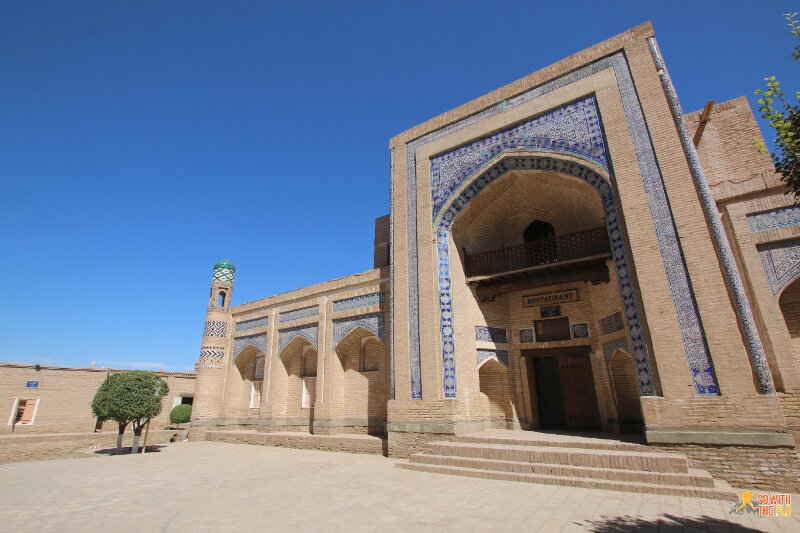 Carvings on wodden pillars inside the Juma Mosque 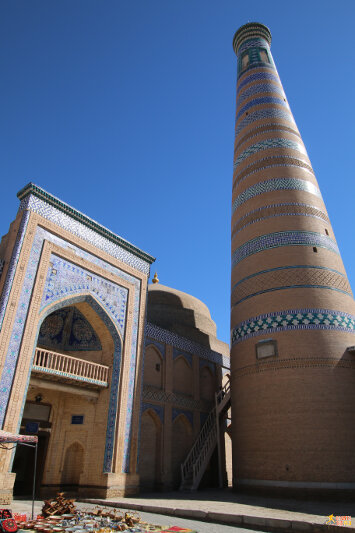 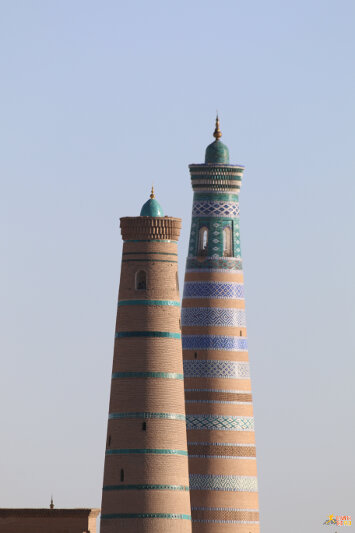 I had dinner in a courtyard and enjoyed a very tasty meal in a beautiful setting: 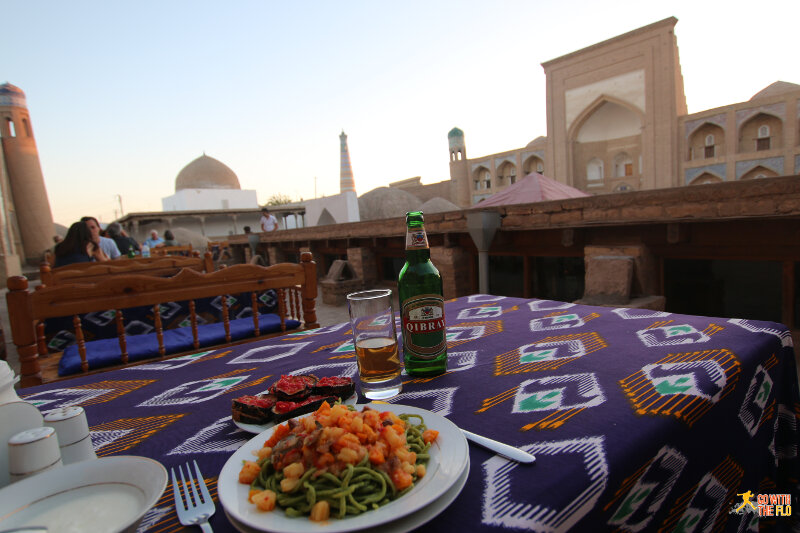 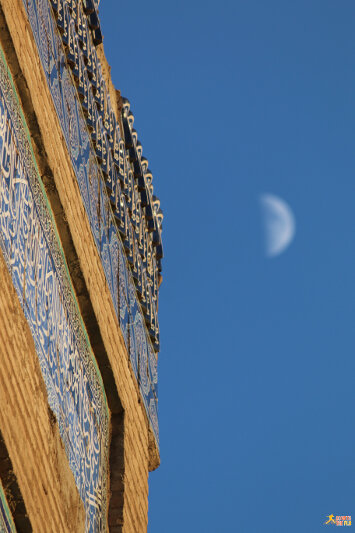 Sunset and moonrise while eating dinner

I decided to only stay one night. I could not visit every medressa or museum but what I saw was beautiful. Apparently many tourists skip Khiva since it is further away from Tashkent than Bhukara or Samarkand but I think it is absolutely worth it going.