The border closing ceremony between India and Pakistan at Wagah

For my one day stay in Amritsar, I had two things on my list – see the Golden Temple as well as the impressive border closing ceremony between the two arch-enemies India and Pakistan. Definitely ambitious for the limited amount of time I had but I figured doable. 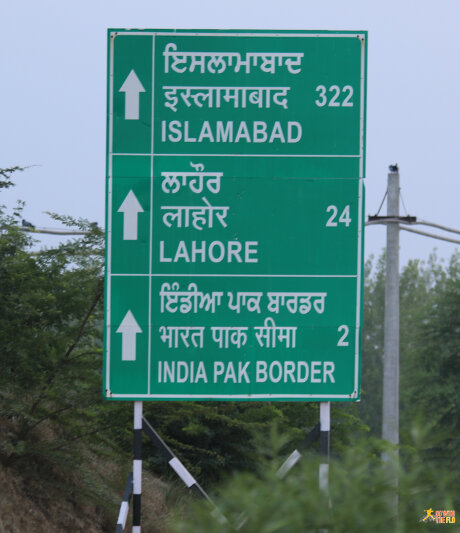 Driving towards the border. Lahore is just like Amritsar close to the border.

After leaving the airport, I quickly dropped my luggage at the hotel and asked the taxi driver whether he’d be available to drive me to the border around 45mins away. His car was probably the most beat up Tata I had ever seen (and that means something) but I figured it would save time. We agreed on 1’200 Rupees and set off around 4pm. Upon leaving, the hotel staff said I was very late but in retrospect I could have left even later as there is reserved seating for foreigners (lucky foreigners). 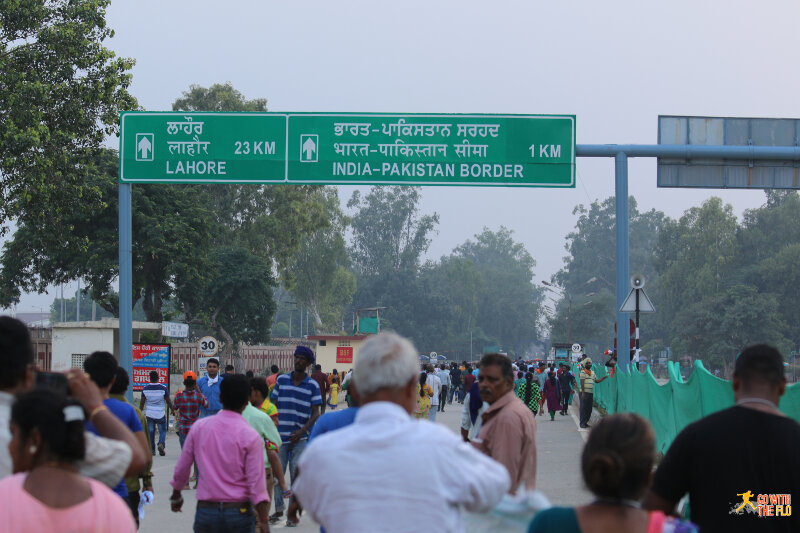 Almost there… walking the last kilometer

For years, India and Pakistan have escalated the border closing and flag lowering every evening in a kind of show whereby they try to out-do each other. The whole thing has become an event for the entire family on both sides. I had seen some photos before of soldiers marching but in terms of the atmosphere, I wasn’t sure what to expect. 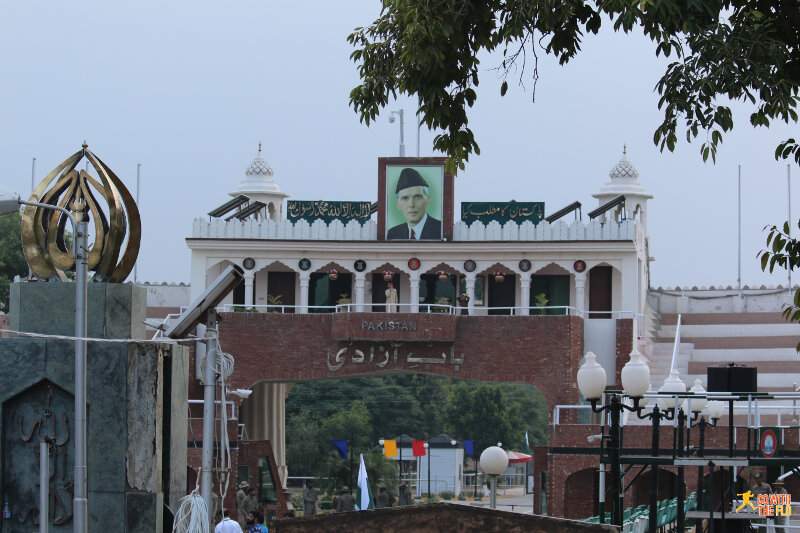 View towards the Pakistani side 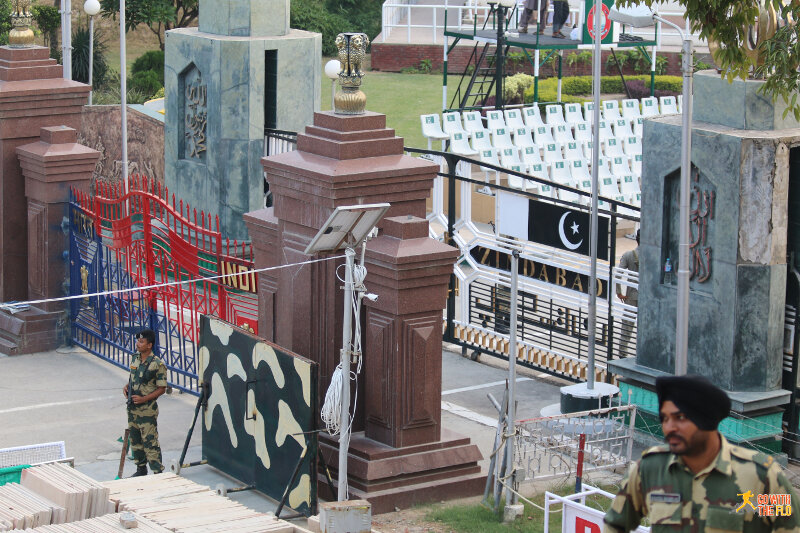 Unless one of the few authorized cars passes, the gates are always shut 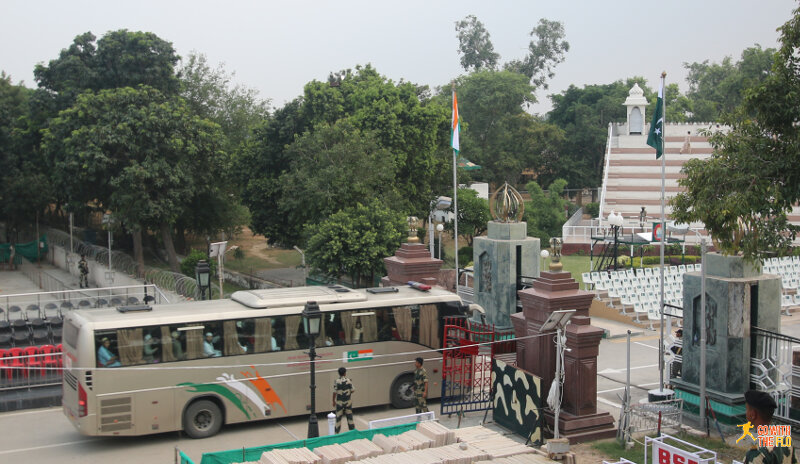 The carpark is about 1km before the actual border and an easy walk. It felt like the walk from a subway station to the soccer stadium as everybody was excited and there were vendors selling flags, snacks and offering to paint your face. You have to go through a number of security checks and are not allowed to carry any kind of bags (cameras are fine) and as a foreigner should carry your passport. I don’t know how but they identified me as a foreigner from far away but they did 🙂 and then moved me to a special lane. Eventually I ended up in a section for foreigners in the bleachers which I was happy with since the general seating areas was already overcrowded.

The excitement in the atmosphere was contagious. Bollywood music was blasting from loudspeakers and everybody was celebrating India. Eventually some ladies started running down the road towards the border carrying flags and then started dancing. At some point the music also starting blaring from the Pakistani side; at this point the mix of the two was a bit too much. 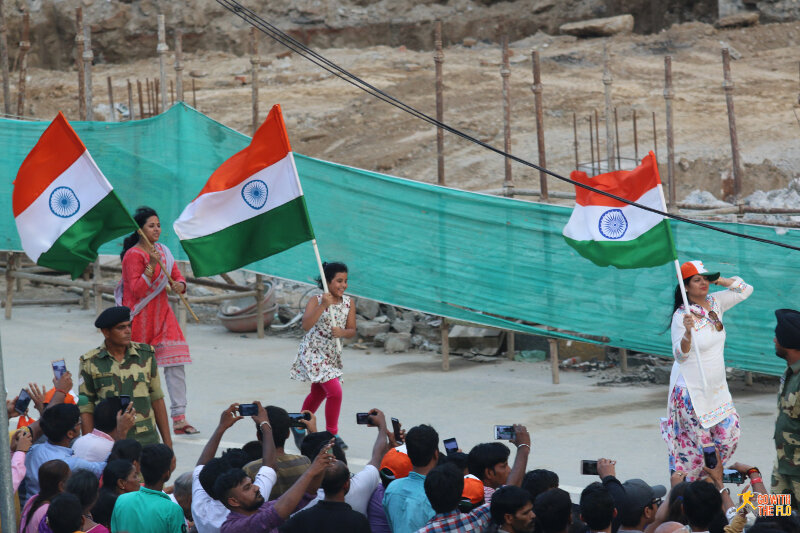 Pre-ceremony celebrations with flags and… 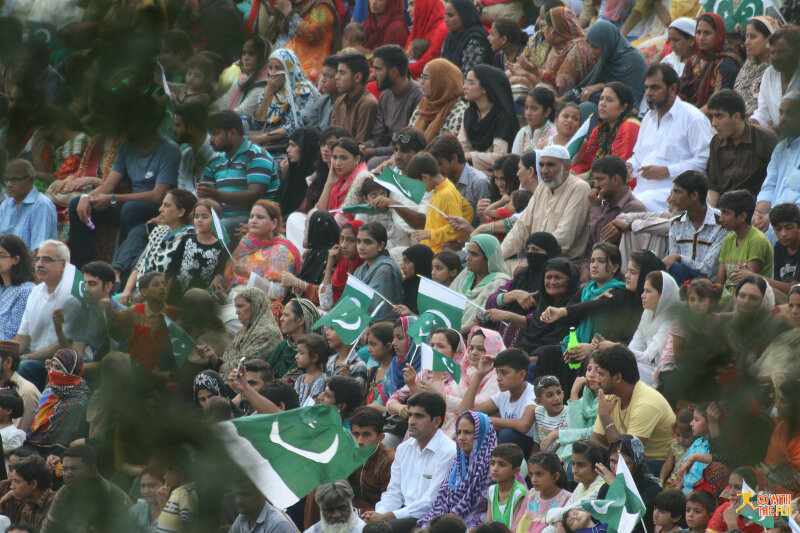 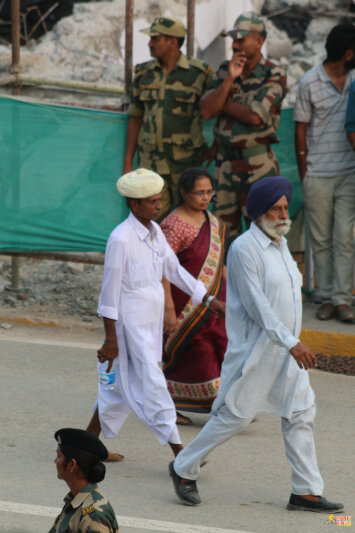 Visitors keep filling up the bleachers 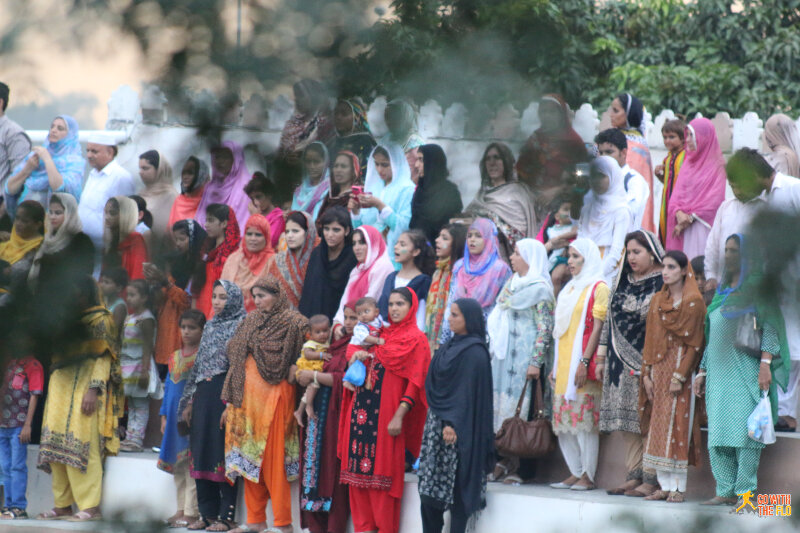 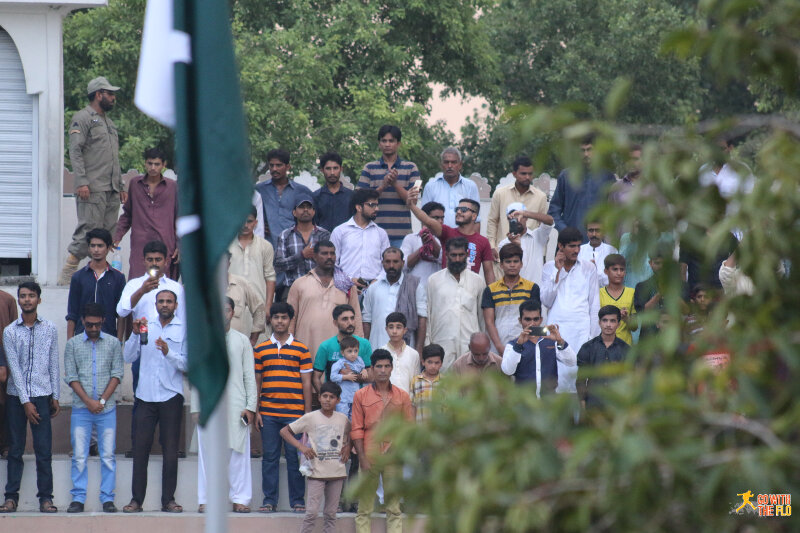 Around 6.30pm the actual ceremony started. Soldiers in special uniforms appeared on both the Indian and Pakistani side. From then on, one side would do a certain act, immediately followed by the other side. It was very entertaining and the crowd was ecstatic. Below are some impressions: 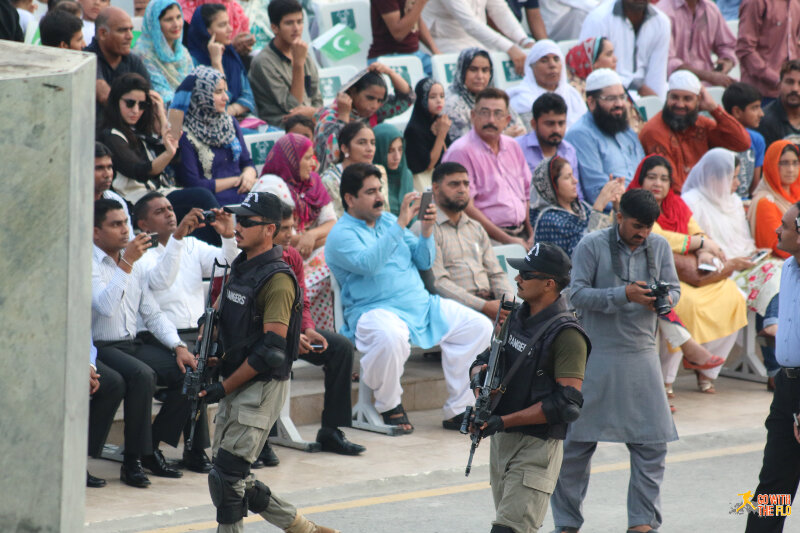 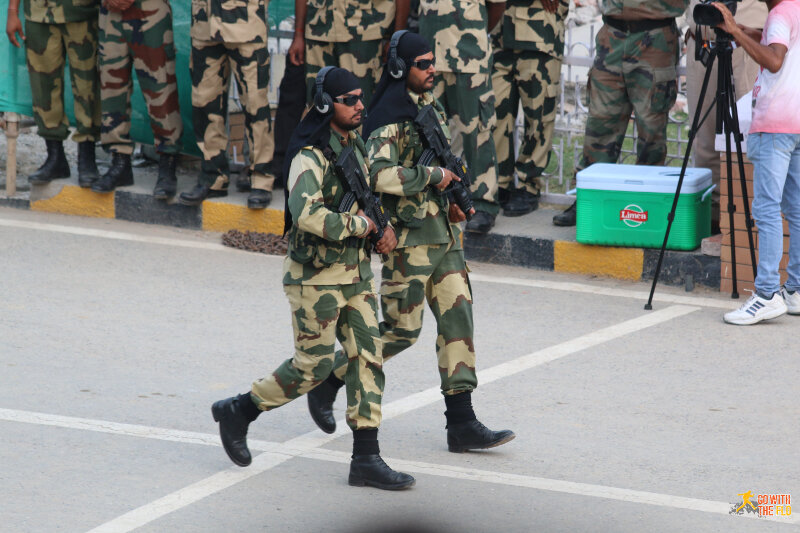 and even tougher guys from India 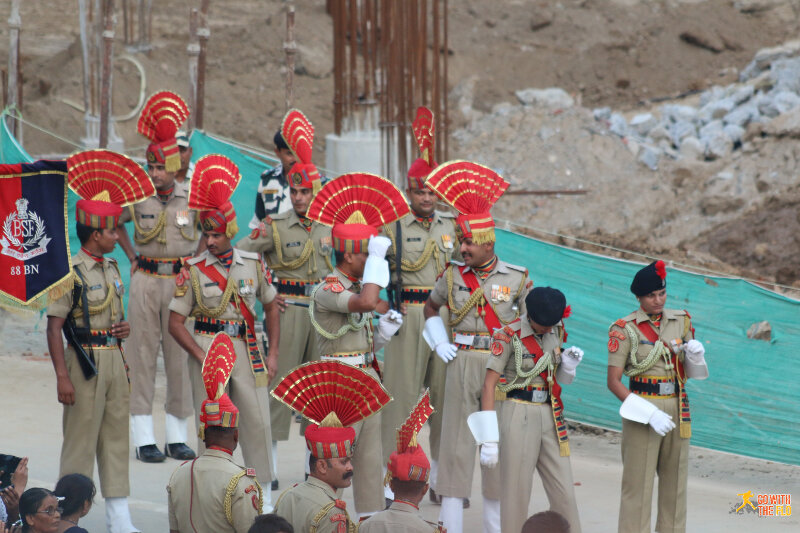 With the tough guys in position, let the ceremony begin! 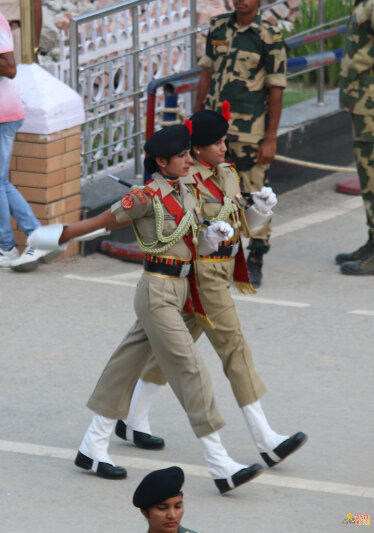 Starting with female soldiers from India… 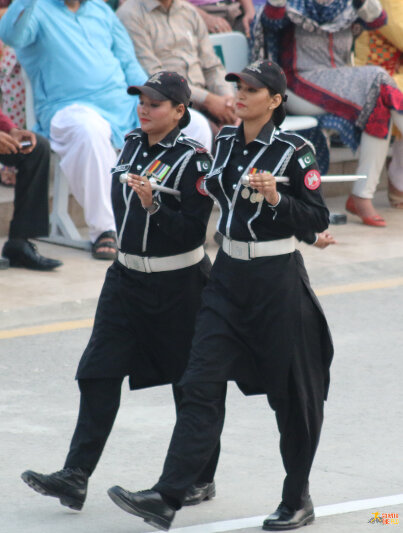 Immediately followed by their counterparts from across the border 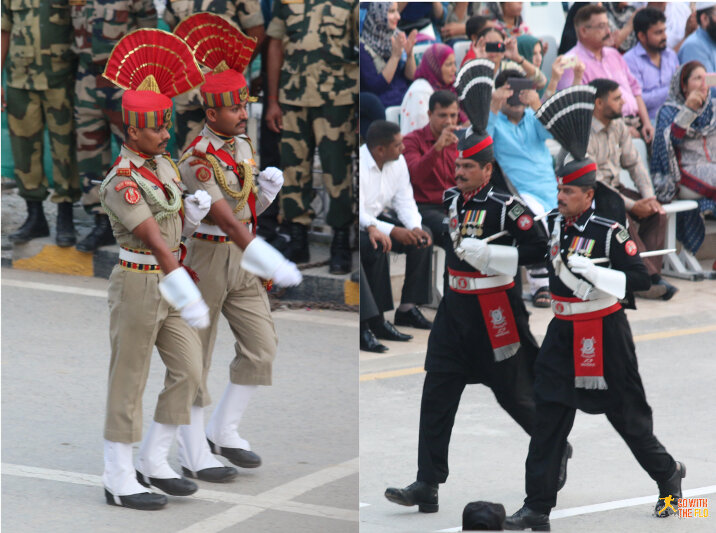 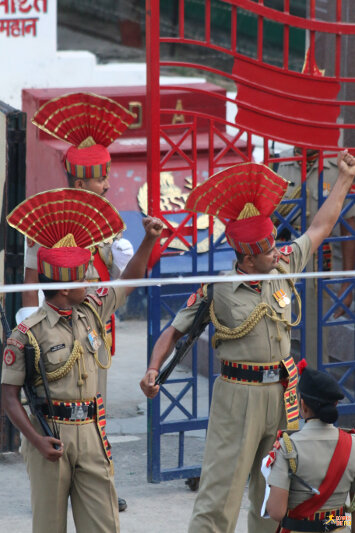 Shouting towards the other side 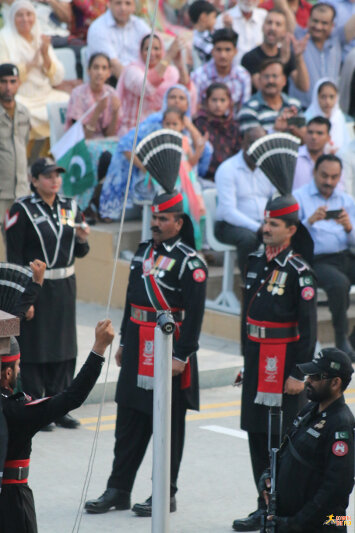 The flag is about to be lowered 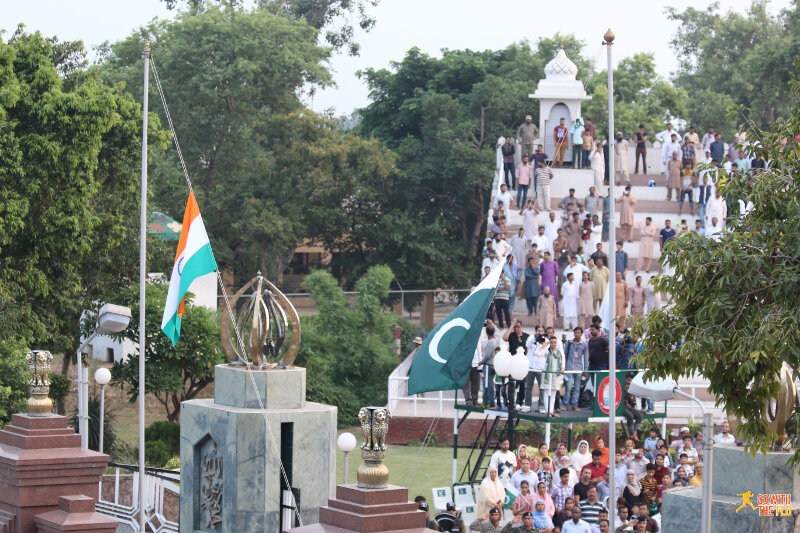 The two flags being lowered in unison 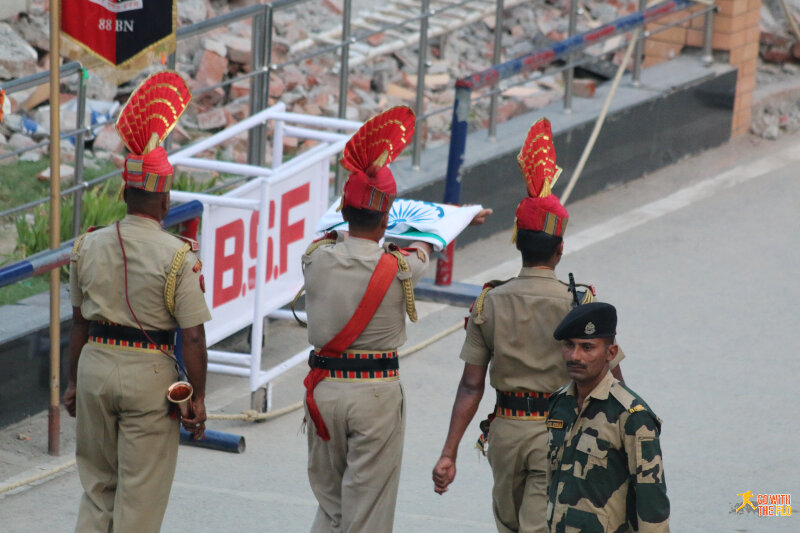 And the Indian flag being carried away

The ceremony ended about half an hour later with the lowering of the flag and the closing of the border. Around 2’000 people attended on the Indian side (more seating is under construction) and made their way back home, mostly with over-loaded auto-rickshaws. Fortunately I found my driver quickly and we made our way back towards Amritsar with a final stop at the Golden Temple.

I would really recommend a visit, not just for the actual performance but especially the atmosphere. It really feels like going to a sports game with everyone cheering on their favorite team. It also makes you think about borders and how much of a hassle they can be. I don’t want to imagine the amount taxpayers contribute to the massive amounts of military necessary for this border. If you’re a taxpayer, at least you get to see the event for free (as do the non tax-payers).