Sorry that it has been a bit quiet lately here on the blog. But have no fear, more content is soon to come. I just got back from a trip to Hanoi and Manila and will be sharing my impressions shortly.

In the meantime, I’d like to share some observations when it comes to changing money. For the past couple of years, I have not really relied upon money changers but instead relied upon credit cards that allow free withdrawals to get cash upon arrival. Unfortunately my go-to card has recently stopped to reimburse ATM-imposed fees. These can be fairly steep; in Thailand it is usually 200 THB (8 SGD), in the Philippines 200 PHP (6 SGD) or in Vietnam 60’000 VND (4 SGD). So I once again started looking at changing money in Singapore before heading abroad. Also, for my recent trip to Central Asia I knew I’d be better off bringing US Dollars – especially in Uzbekistan.

If I had to change in the past (usually small amounts < 200 SGD), I’d just do it at the airport. But with bigger amounts (I changed around 2’500 USD for Central Asia) I started shopping around. I used an app called Get4X to compare rates, but found it to not always be very accurate as money changers didn’t seem to update rates very frequently. The best bet seems to be (surprise, surprise) Change Alley at Raffles Place. There are several dozen money changers and you can very easily compare their rates. 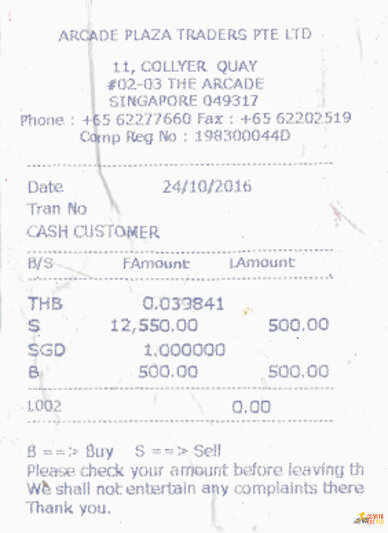 Around the corner from my house is a hotel with several hundreds of rooms and tourists checking in/out nearly 24/7. Right next to the hotel is a money changer that advertised “no commission”… as they all do. Sure, he didn’t charge any commission but his rates were so bad that on the above transaction, it would have netted me the equivalent of 22 SGD less in Thai Baht. That’s an over 4% worse price for an identical product. For small amounts it may not be worth to travel down to Change Alley but for bigger amounts do your homework and shop around!