Pulau Tioman: How NOT to get there

Good Friday – long weekend in Singapore! Flights to just about anywhere except Kuala Lumpur and Jakarta were outrageously expensive, so we settled on Pulau Tioman. Why not travel overland for once instead of flying and visit one of Malaysia’s most beautful island? Sounds good to me.

A hotel was quickly found. Transport was a bit trickier – there is only one ferry operator, Bluewater Express. But multiple agents sellting tickets it seems. After a big back and forth, we secured our tickets – 75 MYR return per person (€19). The schedule is not published until about a month out as the ferry is depending on the tides. Our outbound ended up being scheduled for Friday 9.30am, which was fine by us even though it meant a night in the coastal town of Mersing (the first buses leaving Singapore around 6.30am only make it in time for the 11am ferry).  However the return trip would leave Tioman on Sunday at 9am, which basically meant we would lose Sunday.

Since we had to get to Mersing Thursday evening, we had to go for a transport option from Johor Bharu across the border, since the busses from Singapore don’t depart after noon. We opted for the last bus leaving JB at 7pm that should get us into Mersing by 9pm. Smooth sailing I thought. And 15 MYR (€4) per person was tough to beat.

The first mishap happened when my bus that was supposed to take me to JB did not show up. A call to the hotline revealed that it was cancelled. Makes sense to cancel it on one of the busier travel days. So public bus took me to Khatib, followed by the MRT to Marsiling. This was where it first started to show that I wasn’t the only one headed to the border (not that I was surprised). A short bus ride to the Woodlands Checkpoint and I was jointed by hundreds of travellers headed north. By now it was 6pm, so still 90mins to go until my bus would leave.

But by the time I had cleared Singaporean immigration, I knew the bus would be gone. Not only was the immigration queue nearly 30mins long, but then the next queue to catch a bus across the strait was even longer. We ended up walking the one kilometer across. Not something I would necessarily recommend. Malaysian immigration was fairly quick and we were soon on a bus to the Larkin Bus Terminal, hoping we could catch another bus to Mersing. But as expected the last bus for the night had left.

When going by public transport it is always important to have a Plan B. In this case our Plan B was to take a bus to Kota Tinggi, ca. 100km south of Mersing. Soon enough we were on a bus and reached Kota Tinggi by 10.30pm after a 90mins bus ride. 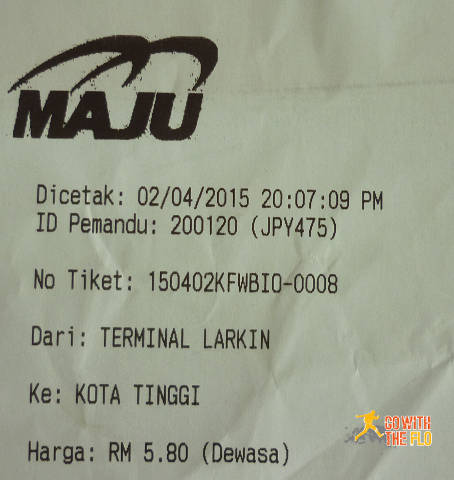 Here we faced the next problem: the last bus to Mersing had left. And we did not have a Plan C. Not wanting to spend a night in Kota Tinggi and take chances to miss our ferry the next day, we had not choice but to getting to know the local taxi mafia. Starting out with 180 MYR, an 80% mark-up of the normal price, the driver generously settled for 150 Ringgit – a mere 50% surcharge. Our negotiating position was rather weak, hence soon we found ourselves in a beat up Proton and on our way.

Exhausted we finally arrived at our hotel, the Muara Inn (which I would recommend for a short overnight stay) by 11.30pm.

1. Avoid crossing the Woodlands checkpoint on the evening before a Public Holiday
2. If you can’t avoid it, cross in a private car
3. If you still have no other choice, bring plenty of patience, factor in lots of buffer before any connecting buses and bring a Plan B & C.

Stay tuned for the ferry ride from & to Pulau Tioman… as that was a story in itself as well.