So far I have not posted reviews of flights on this blog, I think there are others out there that can do this way better. However over the past Christmas holiday I redeemed my last US Airways (now American Airlines) miles for a first class round-trip journey that ended up quite memorable and I think is worthwhile mentioning.

Back in the days, US Airways had various promotions to acquire (read: purchase) miles cheaply. At the time, I purchased the required 110’000 miles for around USD1’200. Add another USD330 in taxes and fee and I had myself a great flight to Europe over peak-season. While it did end up costing almost SGD2’200 at the end of the day, I figured I might as well do first class before American Airlines increased the rates. And on top of that, regular economy fares out of Singapore to Europe tend to get close to 2’000 as well over Christmas.

Initially I had booked Cathay Pacific First Class, however about two months before departure they decided to cancel the flight on that particular day. I was rebooked on British Airways Business Class which is not really an aspiring product to fly on miles. After a bit of HUACA (hang up and call again), I found an agent that rebooked me through Kuala Lumpur on the new British Airways B787-9 First Class. While not CX, it was a new product and I was excited to fly it. It was a good experience and worth it. Unfortunately due to a harddrive failure, I lost all the photos from the flight (and the subsequent visit to BA’s Concorde Room in Heathrow). Hence, I am going to focus on the return journey now.

Malaysian Airlines used to fly a number of A380 and has reduced it to only the London Heathrow route. It is at the same time the only aircraft type in their fleet with a First Class cabin. It was almost the only route offering first class award availability at the time of booking and a chance to sample the product before it is gone.

I arrived at Terminal 5 and had to make way over to Terminal 4. Heathrow being Heathrow, this required a 20mins (!) bus journey around the airport. Seems like this transfer is very popular as I had just missed a bus (that was empty) and was by myself on the subsequent bus. 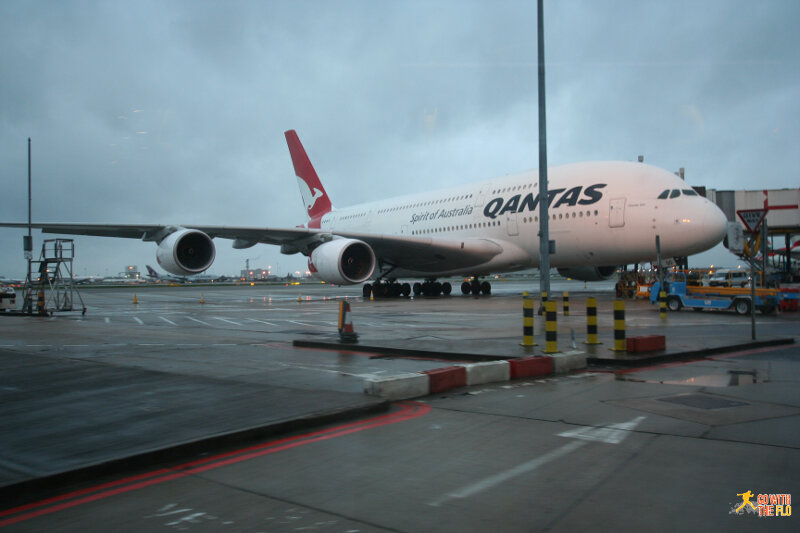 Qantas A380 seen on the sightseeing bus from T5 to T4

Malaysia Airlines maintains their own lounge in Heathrow Terminal 4. There is a Business Class section and a First Class section. They share the same bar in the middle. The lounge was perfectly nice but not too memorable. There were one or two waiters roaming around. The buffet was nice enough but not big nor especially tasty. Overall we were about 10 guests in the First Class section. They do offer a shower as well. 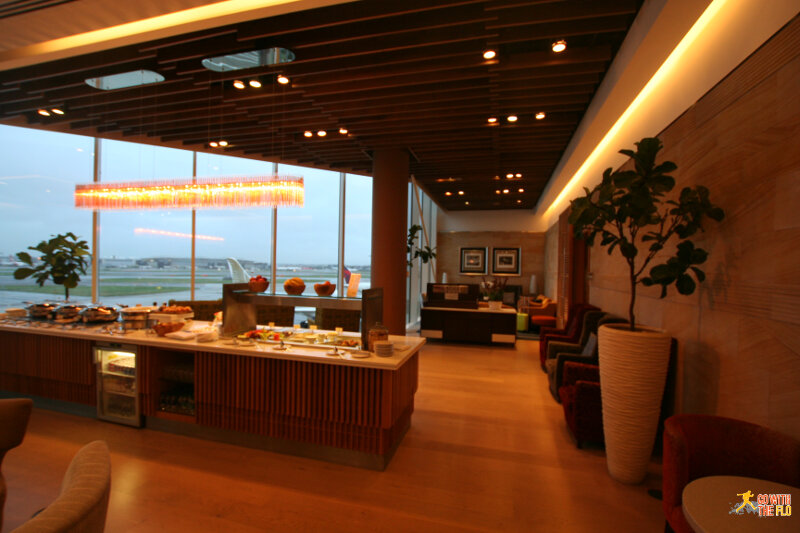 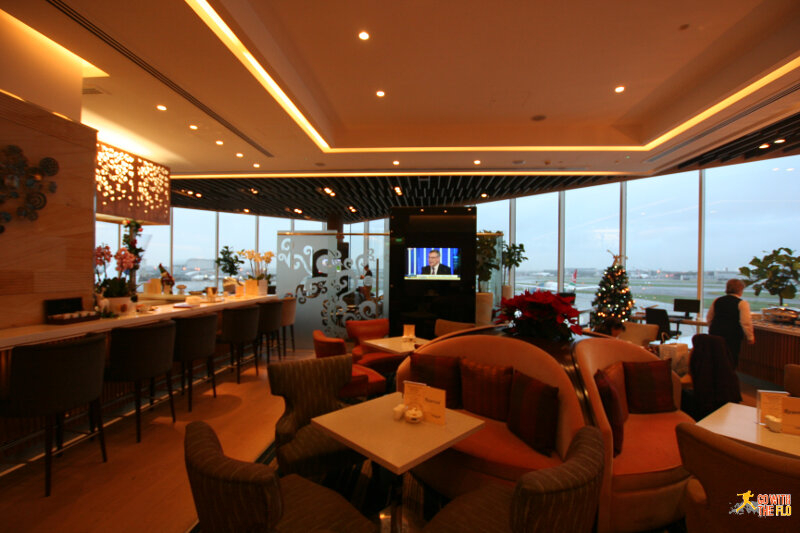 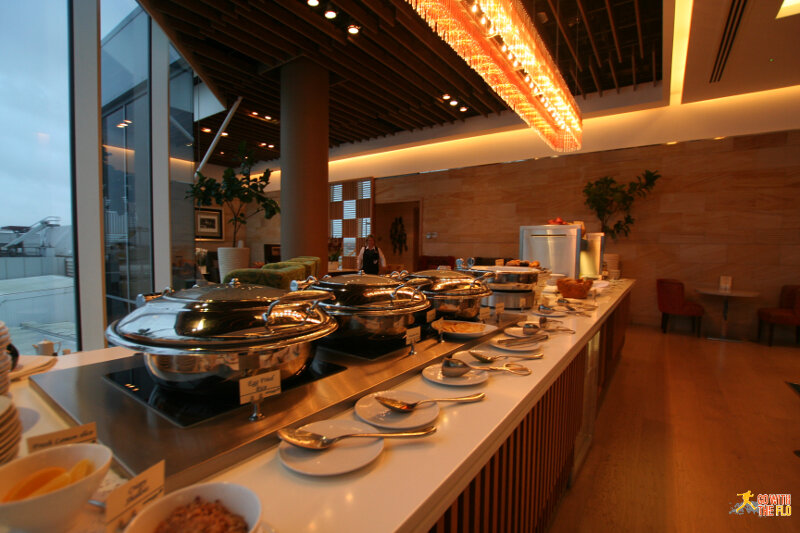 I had almost three hours in the lounge and hence wanted to get some work done on my laptop. What puzzles me is why an international airline lounge would only place an electrical plug at every fourth or so chair, make it very difficult to reach on the floor and only have UK plugs. Luckily, the staff had an international adapter.

What is worth pointing out though, are the great view of the tarmac that the lounge offers. And with the variety of airlines operating into T4, that’s mesmerizing for any avgeek. 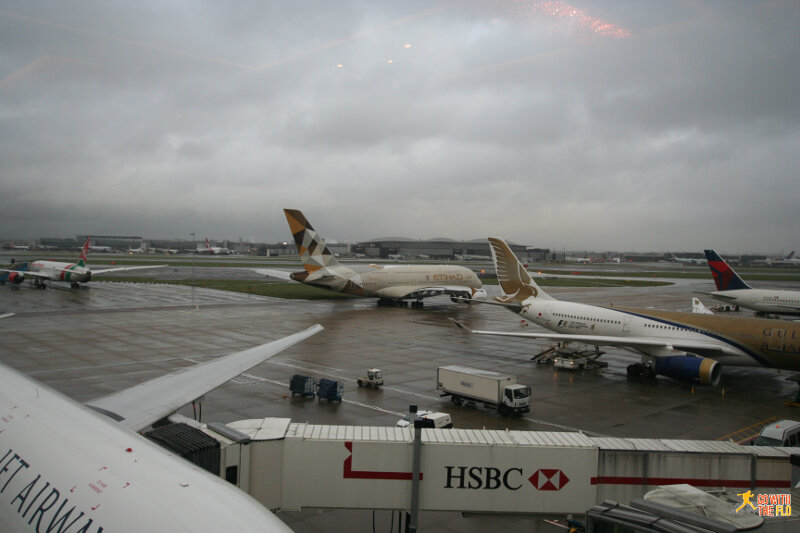 Eventually I made my way down to the boarding gates and entered what would be my seat for the next 13 or so hours. There are a total of eight First Class seats of which six were occupied on my flight. I won’t talk too much about the flight but let the photos below speak for themselves: 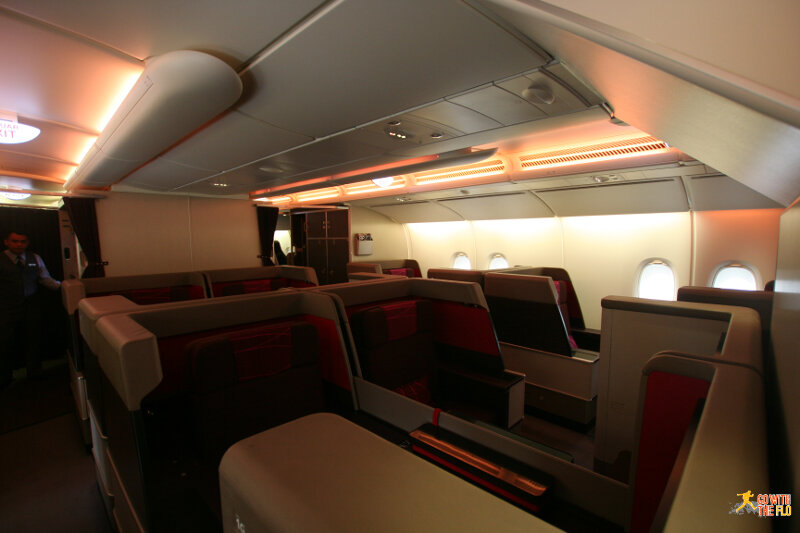 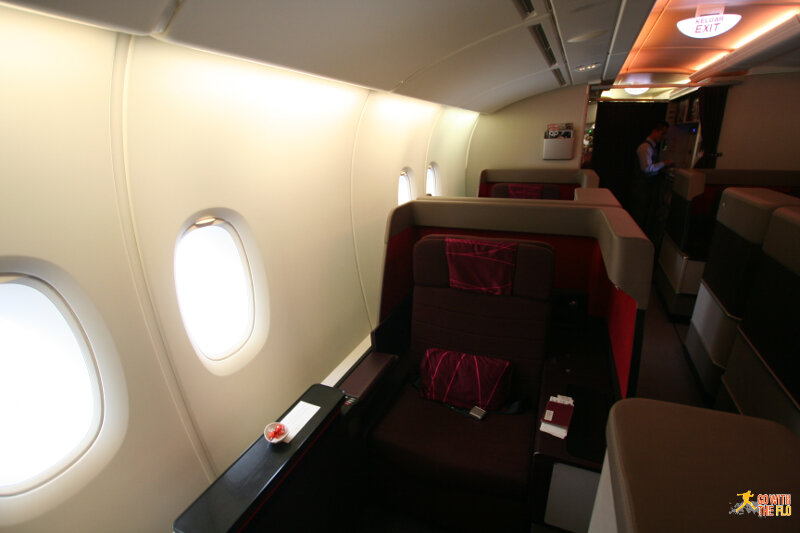 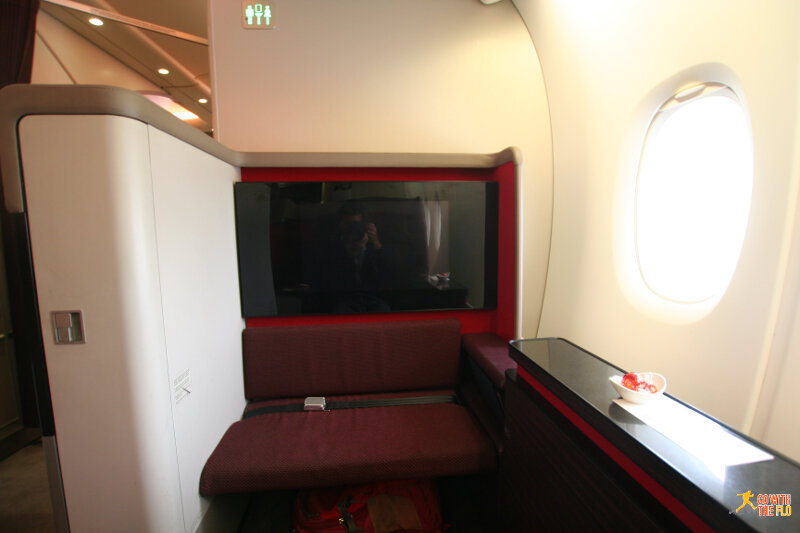 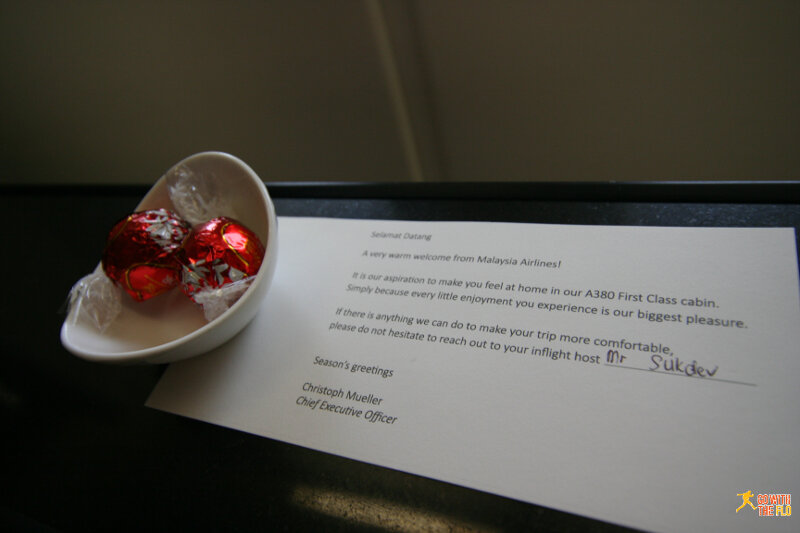 With a slight delay we were airborne. The A380 continues to amaze me how quiet it is, not only at cruising altitude but also during take-off.

There were two flight attendants working First Class. Overall I’d say service was good but not as personal as it was on British Airways.

It started out with some satay. 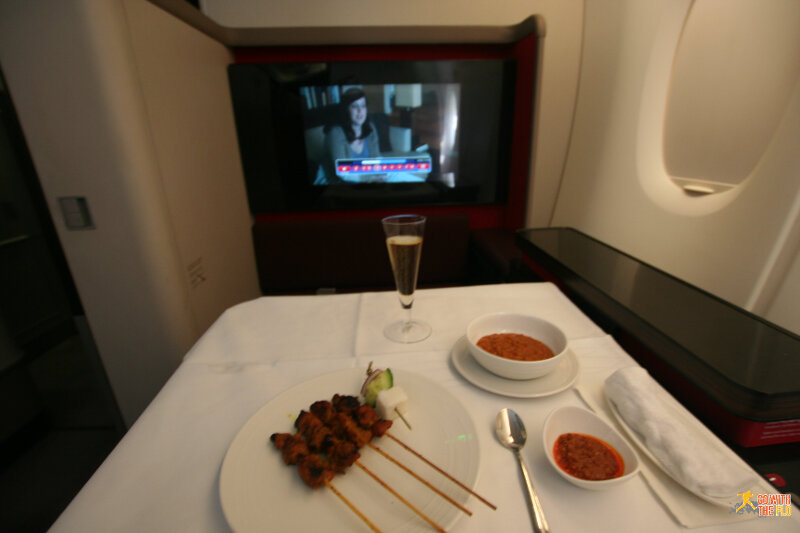 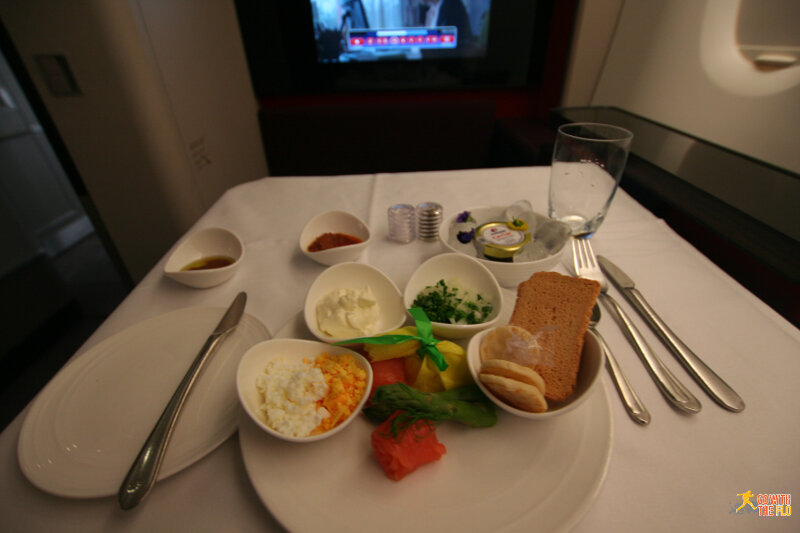 For the main course I chose the lamb biryani. While I don’t consider myself a biryani expert, I have tasted quite a number of biryani’s in my life and this was one of the better ones. 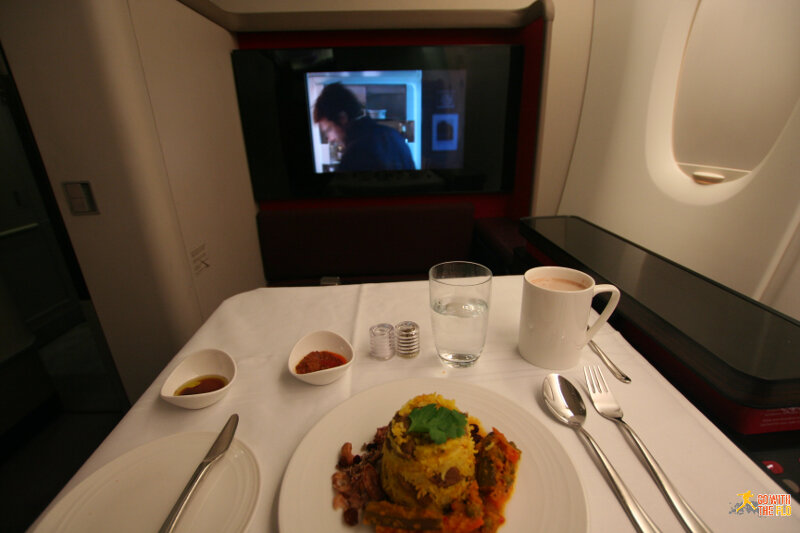 For dessert I went with some kind of tasty cheesecake with berries. 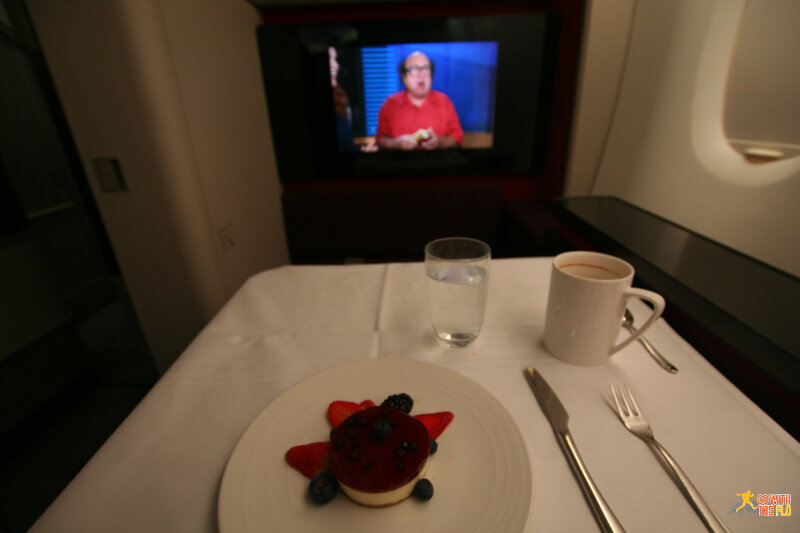 The bed is very spacious and comfortable and allowed me to sleep a solid eight hours. There is a snack menu available.

The rest of the flight was uneventful. After a tasty breakfast we landed more or less on time in Kuala Lumpur. From there it was just a quick hop back to Singapore.

I was glad I spent my miles on the MH A380, who knows how much longer it is available.