The 12 hours drive from Dushanbe to Khorog

So with the plan to fly to Khorogh not happening, I mentally prepared myself for a veeery long drive to Khorogh, capital of the Gorno-Badakhshan Autonomous Region in Tajikistan. My AirBnB host (who was from the region) suggested I’d be at the shared taxi stand at 8am. Knowing that it would be at least 12 hours drive and the guide book suggesting to be there between 6-7am, I was there spot on at 6am hoping to be on one of the first cars. While drivers were there, passengers weren’t. 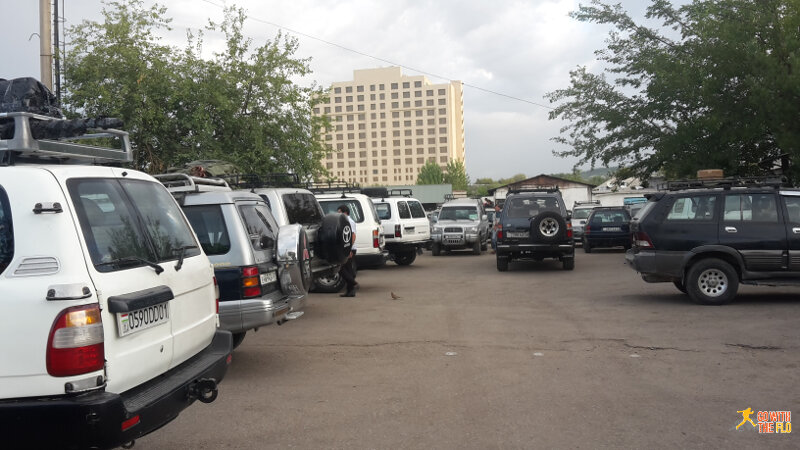 Pamir shared taxi stand in Dushanbe at 6am

All cars going to the Pamir are four-wheel drive Mitsubishis, Land Rovers or some other similar brands. While prices are fairly fixed (based on which seat you choose), there is no cooperative. And in this case I think it would actually make sense. Because here every driver tried to fill his car. I just chose the car that had the most luggage already on top, figuring it would leave first. But while I was passenger 5 out of 7 and we quickly had number 6 as well, we waited and waited. And then for some strange reason which I never understood (again due to my lack of Russian language skills), we waited some more. We finally left at 8.45am. Other cars did not leave much before us, so it was clear that we’d arrive in the dark for the last part of the journey.

Preparing the car for a long drive

We followed the A385 south with beautiful scenery. Unfortunately I sat in the very back with tinted windows and was not really able to take any decent photos. The car had a 2-3-3 “seating configuration”, so there was the driver and a passenger in the front, three passengers in the middle and three in the back. Yes, it was very cramped. Apologies for the bad photos that follow, its the best I could do. 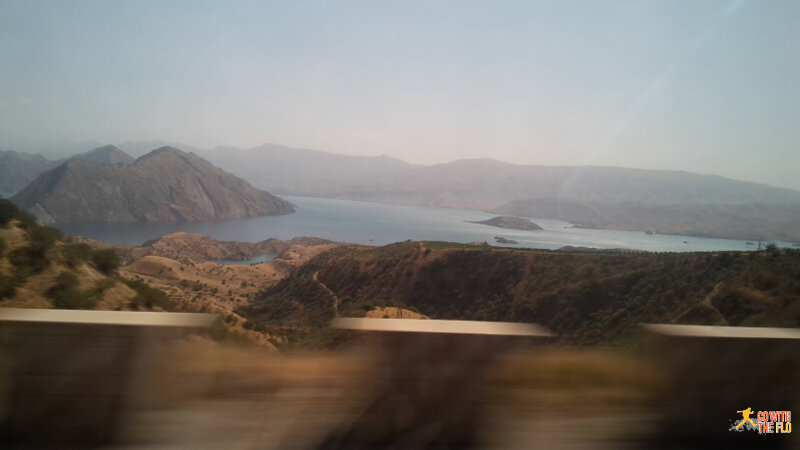 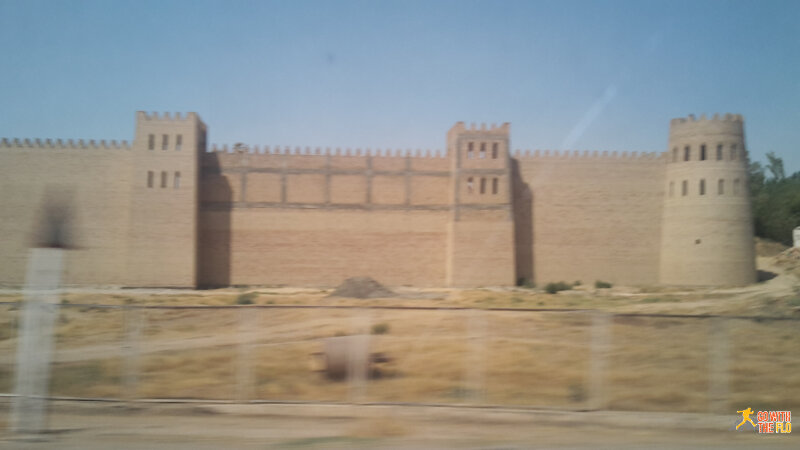 Old fortress somewhere along the A385

After about three hours we stopped at Kulob for some very good lunch. 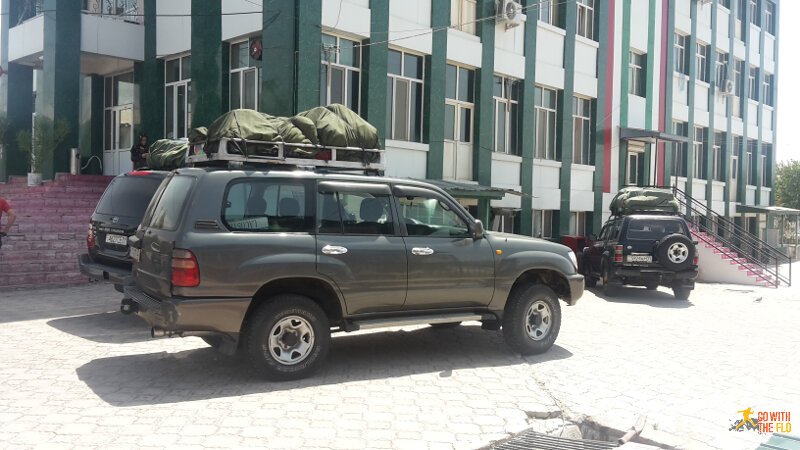 We followed the A385 east and then north, joining the river separating Tajikistan and Afghanistan. For the next several hundred kilometers we drove along the border. Afghanistan at times was just 20 meters on the other side of the river and it was interesting seeing how much simpler houses and roads were on the other side. Eventually the road also got very bad on the Tajikistani side. At this point the drive started to get annoying and the mixtape of Tajik love songs and Reggaeton (which for some reasons seems to be very popular in Central Asia) started to repeat. 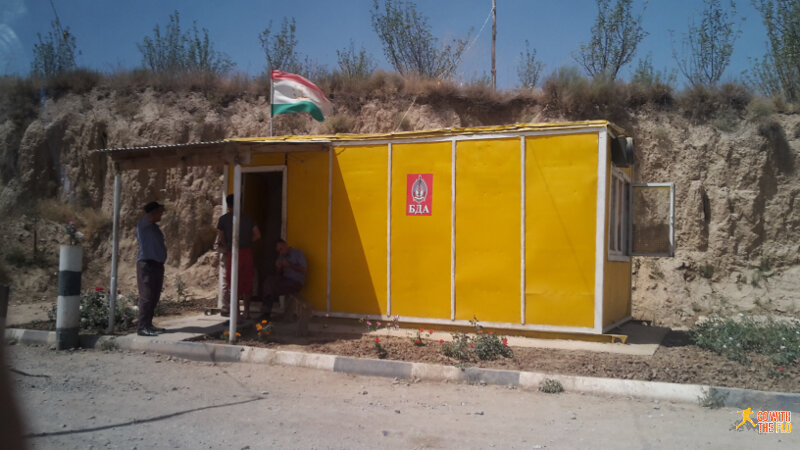 One of the countless checkpoints 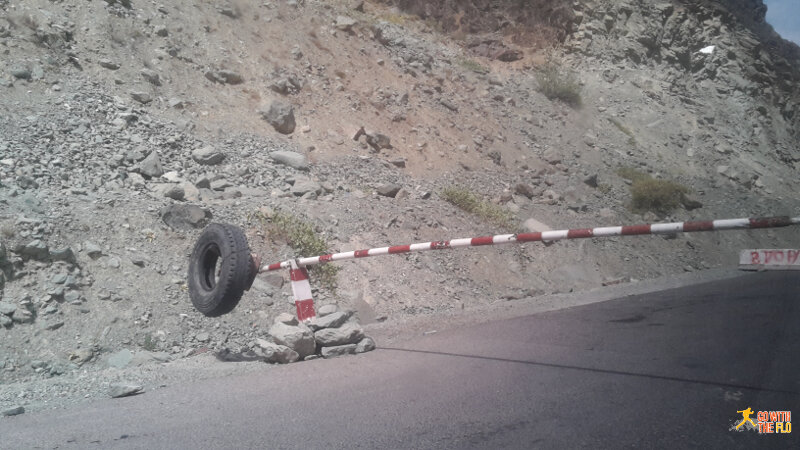 And another checkpoint. Not sure what they check because nobody ever wanted to see my passport or permit for Gorno Badakhshan

View from the back window. Afghanistan on the other side of the Panj river

A day later I talked to some Germans participating in the Mongol Rallye. Appartently a day before we passed the region, they were doing road construction on the Afghanistani side. This was doing using explosives. The Germans’ car was hit by a fist-sized rock, fortunately on the roof. At least it was just a rock flying over from Afghanistan. I guess you could say they were just a stone’s throw from Afghanistan.

After a long six hours since the lunch break, we stopped again for a snack. It was a beautiful terrace overlooking the river and the Afghanistani shores. But by this time I was completely exhausted and we still had three hours ahead of us. Fortunately the road got slightly better. And without anything further worthwhile mentioning, we made it to Khorog shortly before 9pm. Finally. A “taxi” dropped me off at the homestay “Lalmo’s” where I was greeted with a filling and tasty dinner and met several other travelers. 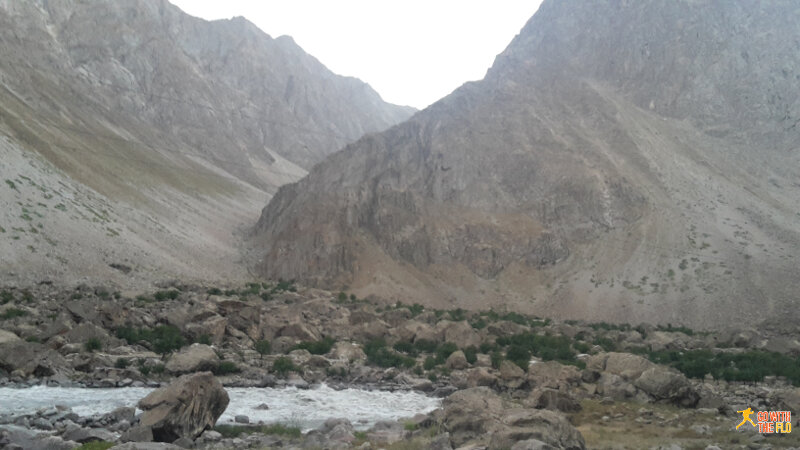 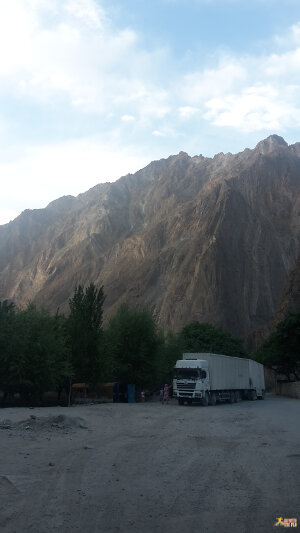 Few hours to go to Khorog

Another roadblock, at least this time no police

While Uzbekistan was full of over 50s tour groups from Italy and Spain, it was nice to meet some individual travelers in Tajikistan, most of which are on epic trips and have exciting stories to share. Over a bottle of Tajik wine, I learned about some of their adventures.

Tasty meal after a long day on the road