Hangzhou: a walk around West Lake and Hefang Street

In late November two friends asked whether I was interested in a weekend in China before year end. I really liked my time in Qingdao a few months ago  and quickly agreed. It was a very spontaneous idea and the initial plan was to go to Shanghai. However when we started looking at flights, we had to abandon the idea as it was a bit too expensive. We ended up settling on Hangzhou, a bit over an hour to the south-west of Shanghai where we could have to for almost half the price.

Over the past two years or so, the airline Scoot has developed a decent network of destinations in Chinese secondary cities with reasonable prices. Just like we flew with them to Qingdao, they were the best option to Hangzhou. The flight there would leave Friday afternoon and back overnight on Sunday night. Flight time is around four hours. 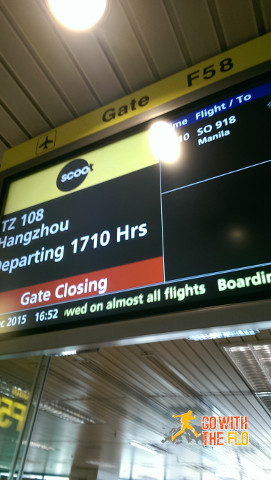 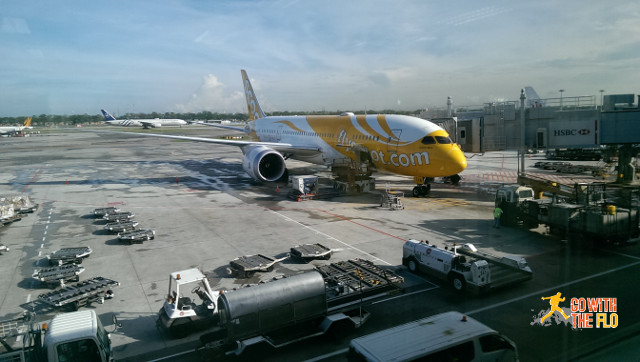 The world’s first airline with an all B787 Dreamliner flight. Our plane to Hangzhou, “Lickity-split”

None of us really knew anything about Hangzhou before this trip. In fact, one of us (it wasn’t me) thought we were going to Guangzhou until a few days before departure. A quick search on Google and Wikitravel revealed that Hangzhou, capital of the Zhejiang Province, has a population of just 7 million. It is famous for the West Lake (西湖), a UNESCO World Heritage site known for its gardens and pagodas around the lake. It has been featured in many Chinese poems, painting and has even been mentioned by Marco Polo in his travel diaries.

We stayed at a hotel not too far from the lake and spent the first day walking around it. During our research we had missed that it was haze season in China. And while we had a pretty bad case of haze in Singapore this year, you haven’t truly experienced haze until you’ve been to China. But the thing is, we weren’t keen to experience the mother of all haze. Luckily, it was not as bad as it could have been on the weekend we were there. While the weather was mostly sunny on Saturday, we were limited in our activities on Sunday due to the rain and spend it walking around picturesque Hefang Street. 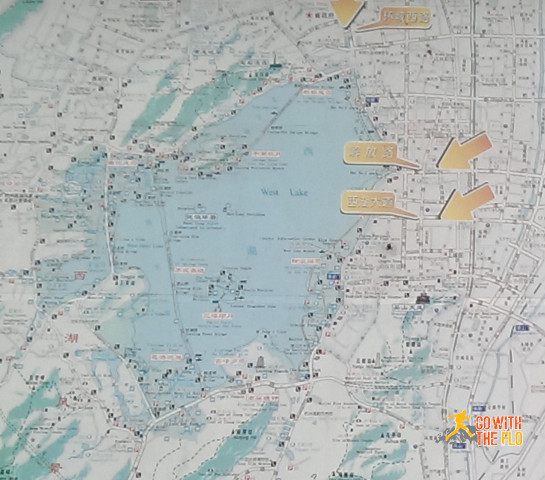 Map of the West Lake. Please excuse the quality, I only had my phone camera with me. 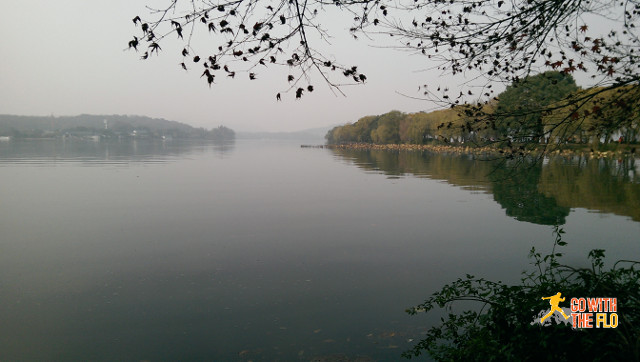 View of the West Lake

The lake’s circumference is around 15km, so do factor in plenty of time if you want to walk entirely around it. We covered maybe a bit over half by foot. It is very popular to take boat rides on the lake. At first I wasn’t sure how exciting it would be to just walk around the lake, but my doubts were not justified. It is a very nice walk (probably more romantic with a partner than two buddies) and offers many attractions in the forms of gardens, causeways and temples. 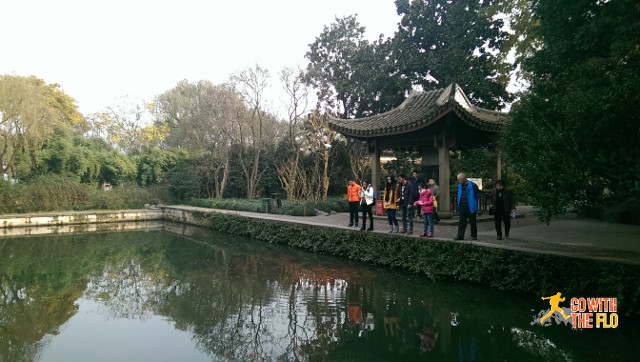 Pond at the West Lake

No cars around the West Lake 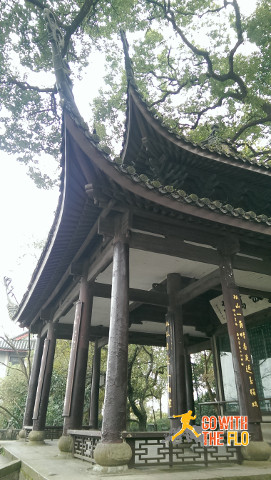 Temple on top of a hill 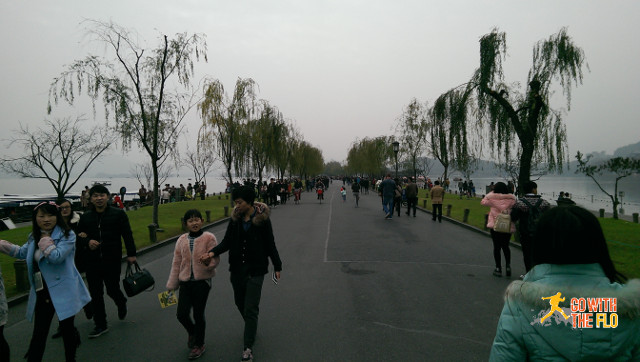 One of the various causeways, the longest being around 3km long

Writing a poem (?) with water

Keep in mind we were there during winter which I imagine is low season. However it was very crowded. A lot of locals from Shanghai like to come and I would expect it to be very crowded during other times of the year.

On the southern shore we visited the Leifeng Pagoda which can be seen from far away. 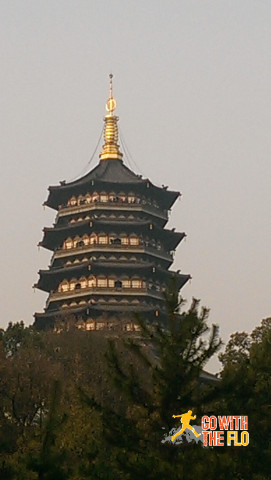 For a few yuans we took an elevator to the top from where you have a nice view of the lake:

Just behind it we visited the much less crowded Jingci Temple (净慈寺). Inside the main hall there is a beautiful Buddha statue: 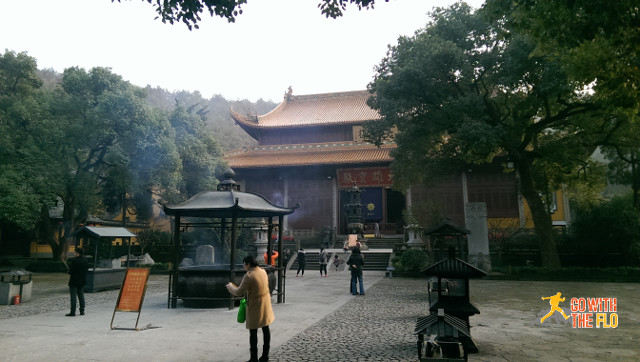 We ended up walking nearly 20km on the first day and were very exhausted by the time we came back to the hotel, hence I cannot comment on the city’s nightlife.

As I’ve mentioned, the second day we were somewhat unlucky with the weather as it rained a lot. We took a taxi to Hefang Street, a touristy but older street famous for souvenirs, traditional pharmacies and the local Longjing Tea. While my photos probably don’t do the street justice due to the weather, it is a good place to pick up some souvenirs (or Christmas presents in our case) and visit the pharmacies. 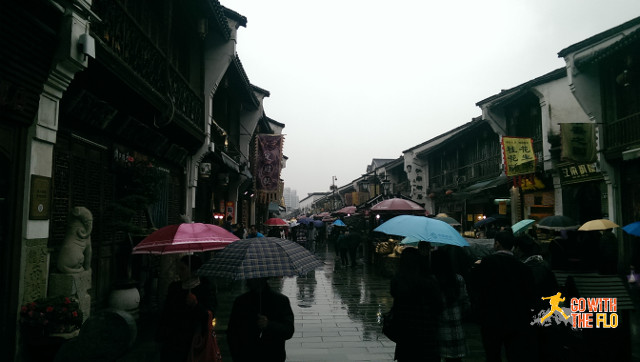 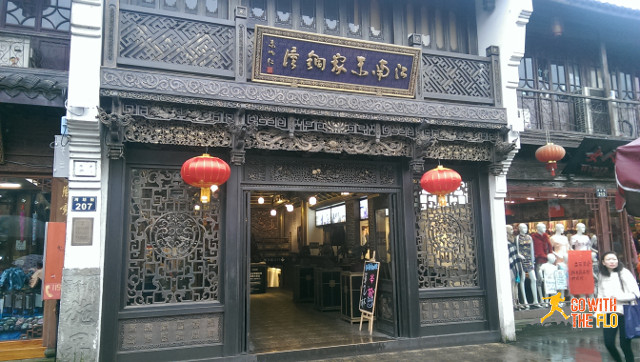 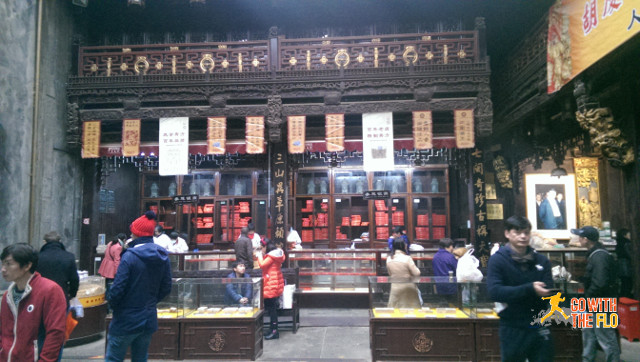 Inside one of the many pharmacies

At that point we still had a few hours before our flight back. Due to the weather we didn’t do much anymore. There were some more points on our list, especially some shorter hikes in the hills surrounding the lake such as walking up to the Baochu Pagoda but all would have required better weather.

Overall we really liked our two days in Hangzhou. The lake is beautiful and you should plan at least a full day for it. Besides Hefang Street we felt that otherwise the city does not offer too much else for tourists but we would have liked to explore a bit more of the nature around the lake and maybe visit one of the villages in the vicinity.

Stay tuned for some photos of the more “interesting” food we saw.