After six days of Uzbekistan, looking at countless medresses and eating too much schaschlik and somsas, I was ready to move on to Tajikistan. Uzbekistan was great and now is the time to visit. I’ll have a post soon on why I think you should better go soon.

While the two countries are neighbors, they don’t have a particularly good relationship. Tajikistan plans to build the world’s largest hydropower dam, the Roghun dam. It would make Tajikistan energy independent but at the same time Uzbekistan is worried about the effects on its country. There are several other factors that have deteriorated relationships between the countries.

The effect on travelers is that the closest border from Samarkand has been closed for some years now, requiring a big detour to the next land border.

The route is not particularly well traveled, so I was a bit worried about finding transport. Again, there are no buses and instead you have to rely on shared taxis. I was mentally prepared to charter an entire car but still made the trip to the shared taxi stand in hopes of finding someone to share the ride with.

I left the hotel at 5.45am and caught a taxi to the Grebnoy Kanal/Betonka stop. I was the first passenger and was quoted USD35. I was lucky and 10mins later a grandmother and her granddaughter showed up, also traveling to Dushanbe. But then we waited…and waited. Shortly before 7am, the driver told me if I paid USD50, we’d leave. It was still too early for my bargaining skills, so I agreed. I asked him when we would arrive at the Sariosiyo/Tursunzade border and he said 1pm. The guy was an absolute pro as we arrived at 12.55pm. It was a long, uneventful drive with changing scenery. 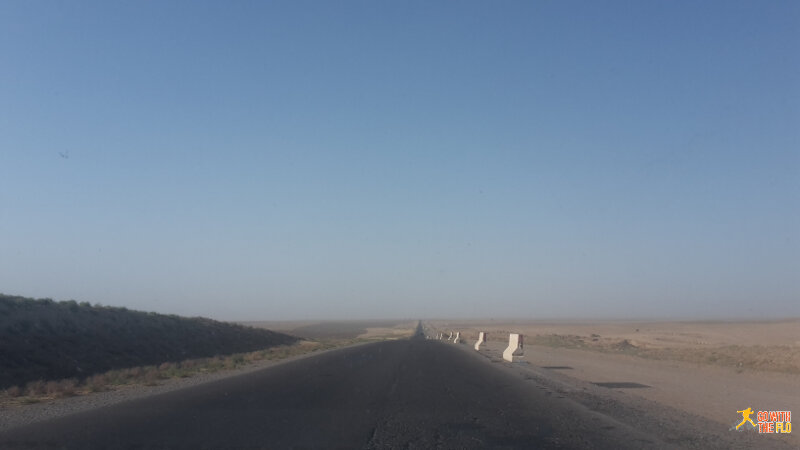 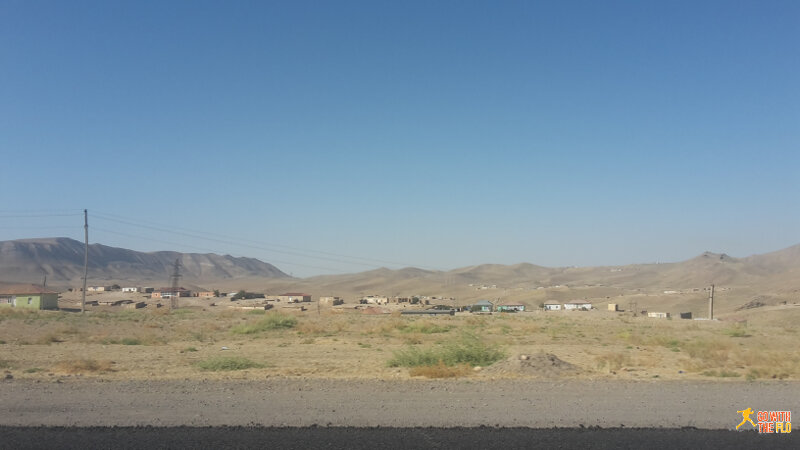 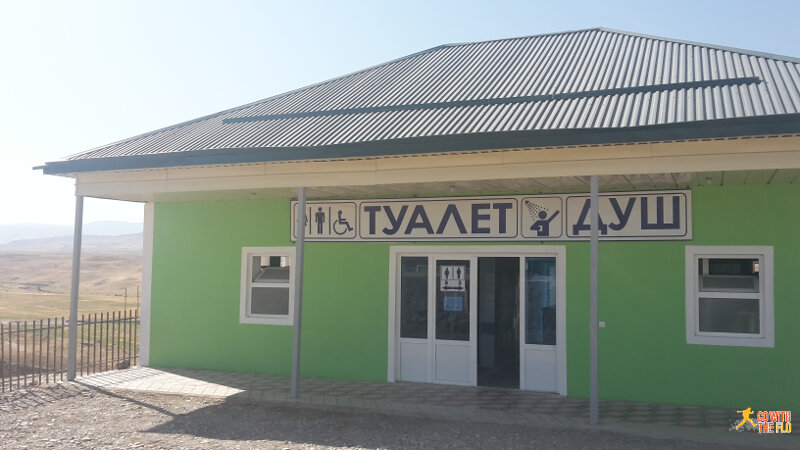 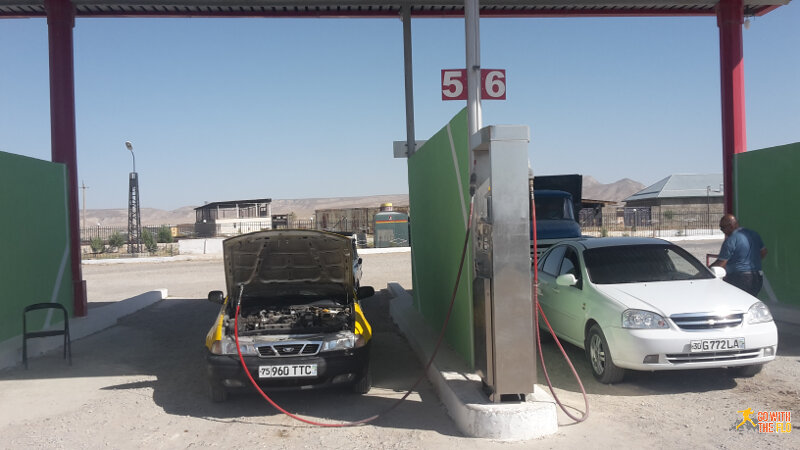 Topping up on methane

The vast majority of vehicles in Uzbekistan run on propane, some on methane. Only very few on gasoline, which is very hard to find. 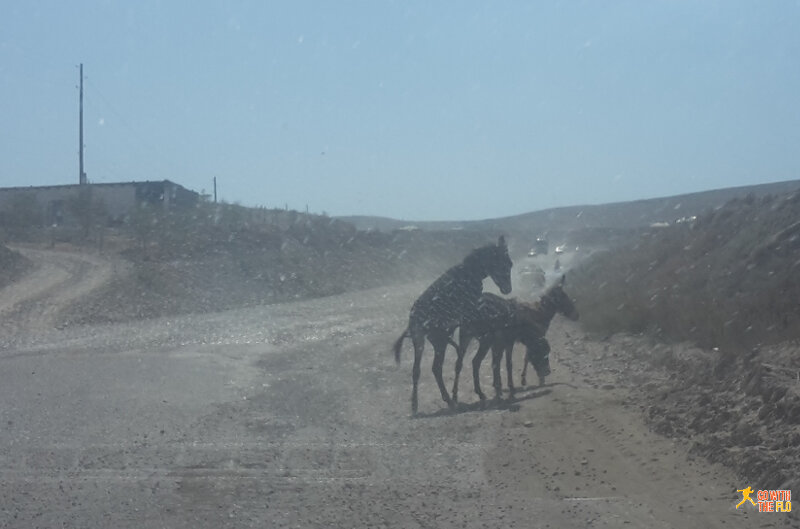 Donkeys on the road in the middle of nowhere 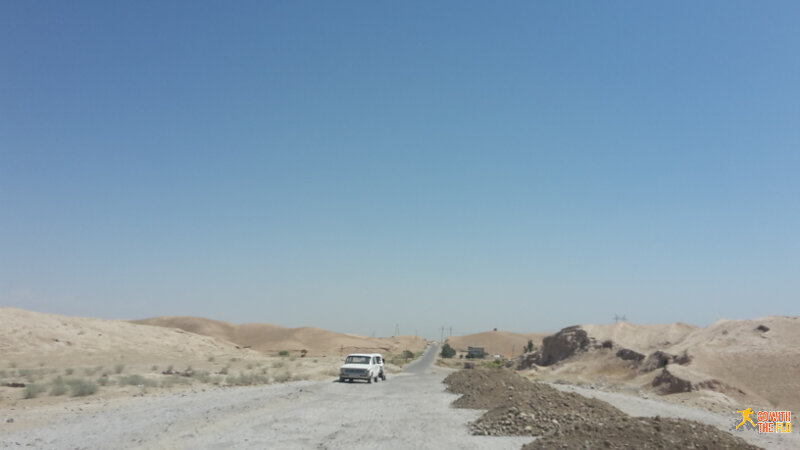 I’d say about 60-70% of the road was in decent state, the rest not. Nevertheless, we made good progress and arrived right on time as predicted. The driver seemed to know the road in his sleep. He even seemed to be buddies with most of the police guards along the road blocks on the way. He frequently made phone calls, and it almost looked to me as he’d call ahead to the next checkpoint to announce his arrival. I had to show my passport twice and my particulars were handwritten into a big book.

At the border we were dropped off. Vehicles are not allowed to drive to the other country. So we had to haul our luggage to the Uzbekistan checkpoint. First stop was customs. I had read some reports that they’d scrutinize everything – and they sure did. I had to unpack my backpack (at least it reminded me that it is about time to do some laundry). The customs officer went through all my medicine, looking for some prohibited ingredients. But what really annoyed me (even though I had read about it, I couldn’t believe it is actually true), they went through all the photos on my phone and laptop. One officer each. Apparently they search for pictures of military installations, terrorists or even nudie pics (not sure whether the latter would get you in trouble or they’d copy them). They even went through photos from way before Uzbekistan. Now, I am not sure whether they know but there is something called the “internet”. And this internet (or in Bushism, the internets) allows you to upload files to the cloud or send it to other people. So you can delete it on your phone, but guess what – it hasn’t disappeared from the face of the earth. So I honestly don’t understand their logic. At all. The whole process took about 40mins. Luckily I was almost the only person there, so did not have to wait in line. Oh, and nobody ever asked whether I have more than one phone or wanted to see what’s on my camera.

I was then stamped out of the country. A requirement is also to collect registration slips, accounting for your stay every night. Luckily you only need a slip every third night, so it did not matter that I stayed in an unofficial accomodation (AirBnB) for two nights in Bukhara. You also have to declare all your cash upon arrival and fill out the same paperwork again when departing – to make sure you don’t carry more cash when you leave. All in all a very strange system and I was happy to have passed the border.

We (my two fellow taxi passengers and me) then had to haul our luggage through no-mans land to the Tajikistan border. It’s always a strange feeling to walk through no-mans land for several hundred meters with heavily armed guards on both sides. I’ve done it previously between Thailand/Cambodia and several countries in Central and South America but it is still a unique experience.

Luckily the Tajikistan border guards were very friendly and efficient. As of June they have electronic visas. Another country that has realized how much more efficient this is if they are just after the money from tourists. I was stamped in quickly, we passed customs with no questions asked and met the friendly Tursunzade taxi mafia.

Now, I took a year of Russian back in 9th grade but except for reading Cyrillic script, I have forgotten just about everything (I don’t think it helped that classes started at 7.30am). I would have never been able to negotiate with these guys but the grandmother told them off. Wow. To the point I was almost worried that shit would soon hit the fan. I was actually glad I could just stand there like blur sotong. In the end, they drove us to the town of Tursunzade for 21 TJS each (SGD4). There the grandmother again organized us shared transport and we reached Dushanbe at around 3.30pm. Thanks again to her for helping me!

A long and exhausting day of travel but Dushanbe welcomed me. 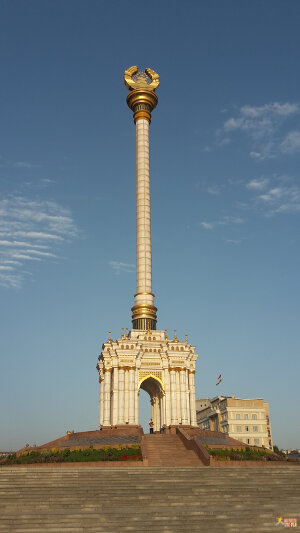