Finally made it to Koh Samui!

As some of the regular readers might know, I’ve researched just about every possible Friday evening to Sunday evening getaway flight combination out of Singapore – preferably with direct flights only. In Thailand, the only destinations that work are Bangkok, Phuket – and Koh Samui (and previously Pattaya but Air Asia seems to have changed flight timings). Hat Yai, Krabi and Chiang Mai do have direct flights, however they leave mid-day out of Singapore, so you’d have to talk at least half a day off.

Koh Samui has been a tricky one. Bangkok Airways has a monopoly on the route. Actually, they have pretty much a monopoly on every route out of Koh Samui Airport (USM), which makes the flights obscenely expensive. Fares for the 90mins flight start at ~SGD500. Crazy if you can consider that you could instead fly to places like Langkawi or Phuket for under SGD200. 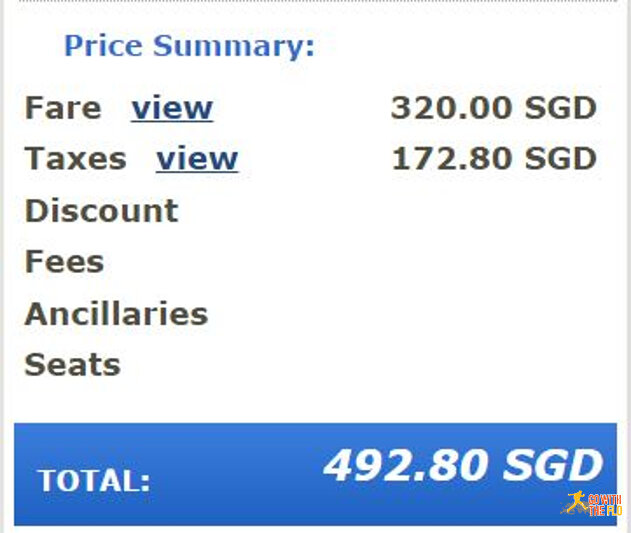 SGD492 for a Fri-Sun evening flight to Koh Samui

Fortunately, a while ago I stumbled upon a Japan Airlines Mileage Bank promotion whereby you could get discounted Bangkok Airways tickets using their miles. The cost depends on the total distance of your ticket, with Singapore-Koh Samui-Singapore falling into the middle bracket (2*624 miles):

I had booked the trip last year in October to get away from the haze. Well, it was so bad that on my day of travel, the haze went all the way across Thailand and covered Koh Samui so that the flight ended up being cancelled. At the time, the trip was 8’000 miles which were then refunded. When I booked again this year, everything went smooth until someone from Japan Airlines called four days after booking to inform me that the price had risen to 10’000 miles effective April 1, 2016. Well, great. They could have mentioned that when booking the ticket. In the end they just let it through with the lower price as it was obviously their fault. On top of that, I still had to pay government and airport taxes (fair enough) as well as fuel surchage (SGD108 – what a joke) for a total of SGD172… despite using miles, you still pay around as much as a regular ticket to another beach destination can cost you.

I was excited to try Bangkok Airways to see what service is like on-board such an expensive short-haul flight. They fly twice daily on the Singapore-Koh Samui sector. Our flight was right on time with a very light load (<50%). 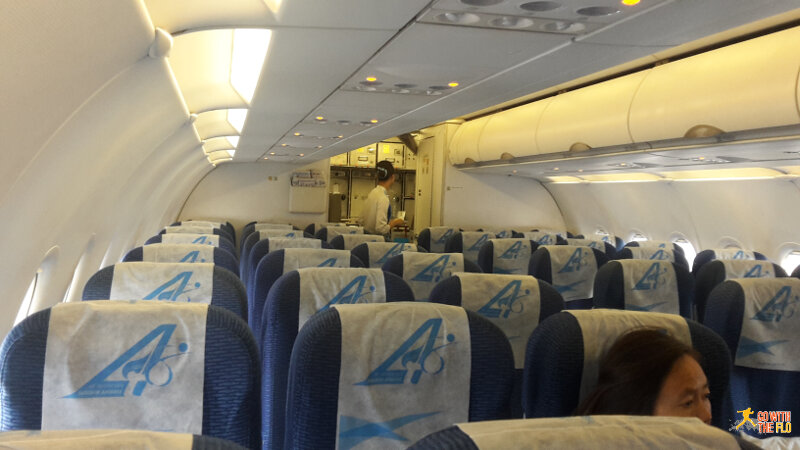 We left Singapore Changi Airport’s Terminal 1 and taxied past all the European carriers who had just arrived. 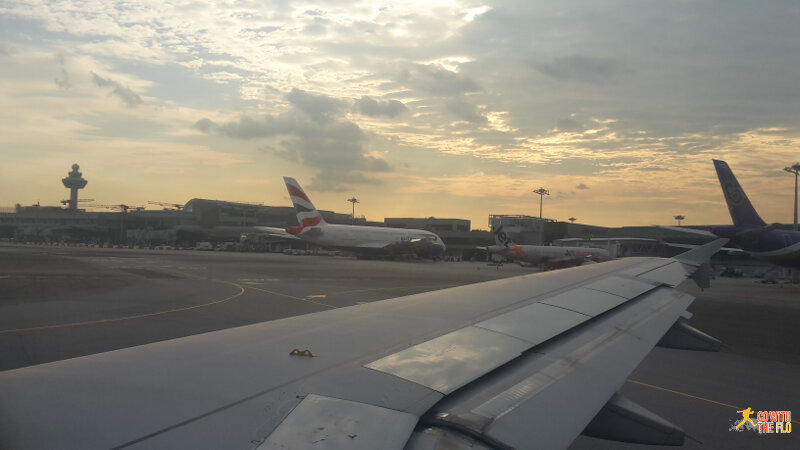 On-board service was quite extensive for such a short flight and after so many legs on low-cost carriers, I wasn’t really used to getting a full meal anymore. 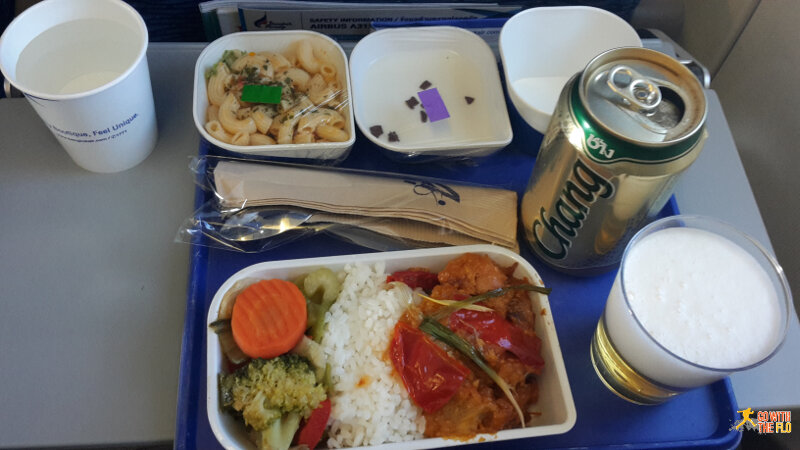 We landed on-time at Koh Samui and were ferried to the terminal in the unique trolleys that I’ve only seen at this airport: 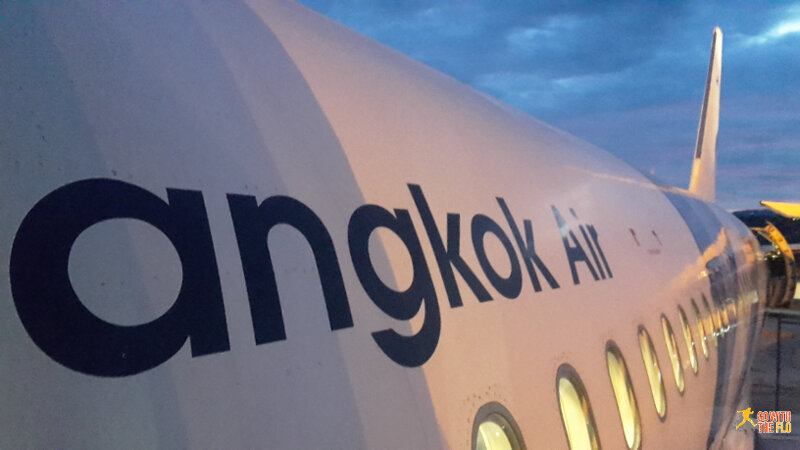 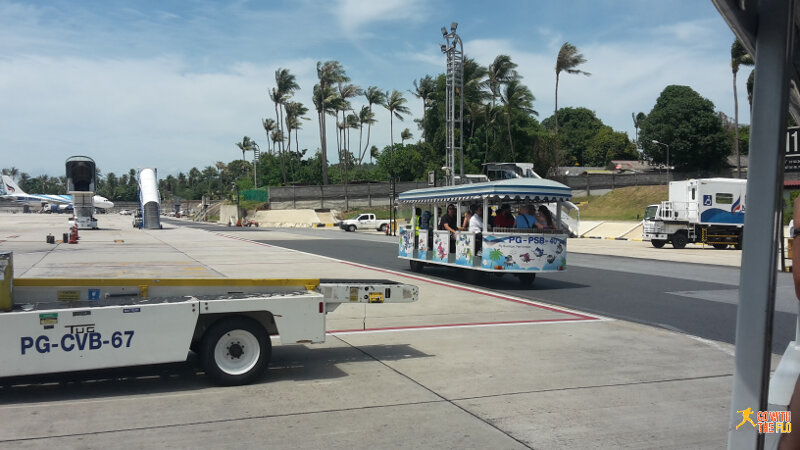 Unfortunately immigration was bad. Apparently we had just landed after Bangkok Airways’ Hong Kong and Chengdu flights which seemed to have way better load factors than our flight. It took us over half an hour to get through. Once in Thailand, we were greeted by the local taxi mafia. So we just walked a few meters passed the airport gates and found a friendly family that drove us the 5km to our accomodation, Imperial Boat House in Cheong Mon.

I chose Cheong Mon because I read it is a bit more laid back but still close to the airport. The hotel was a typical four star resort and was well maintained. Guests are mostly from the PRC and Germany. 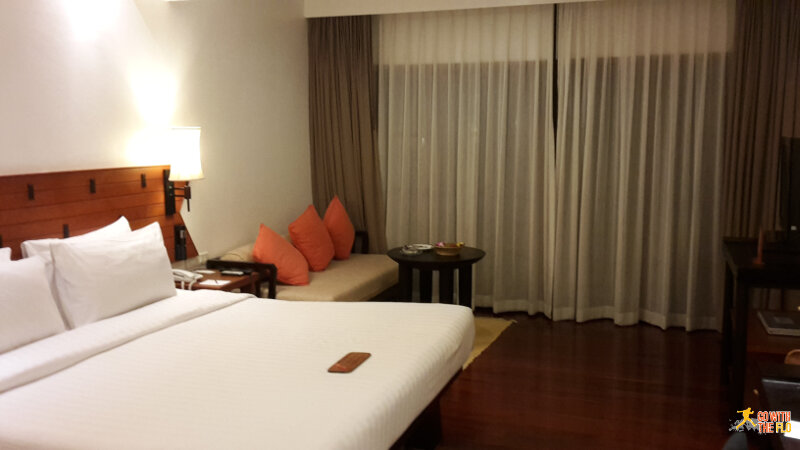 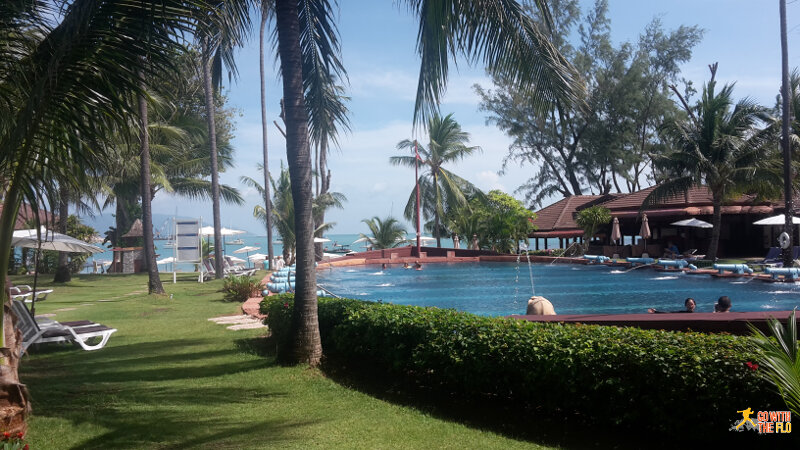 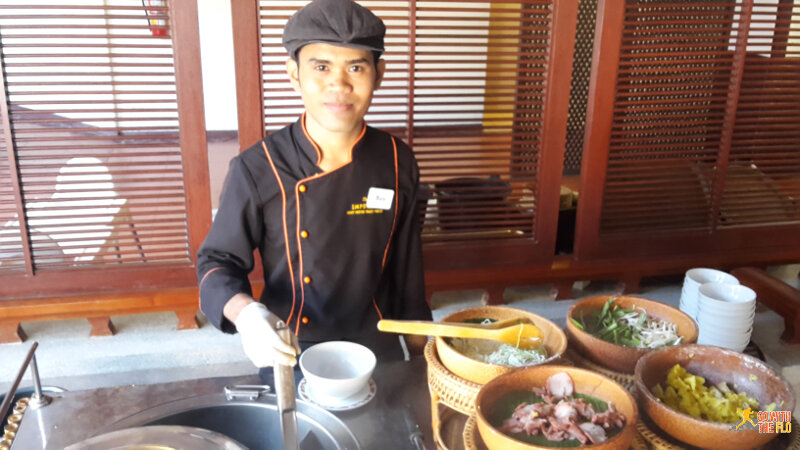 Cheong Mon is a relatively short beach (maybe 1km), yet still full of hotels. However it doesn’t feel super crowded and it’s very clean (both water and beach). 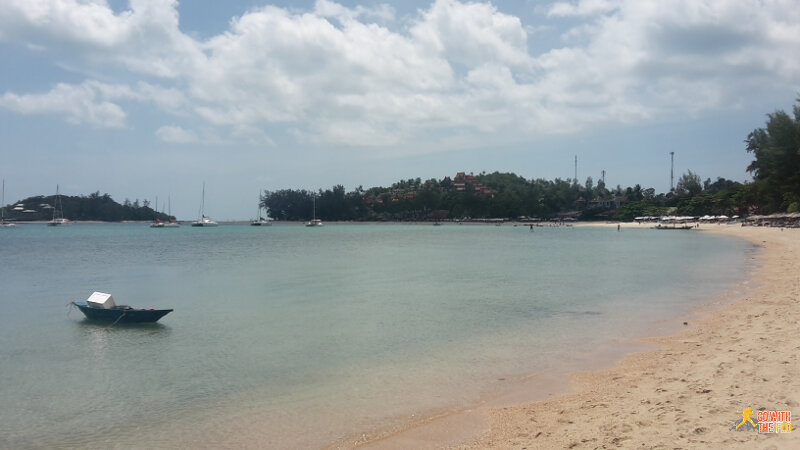 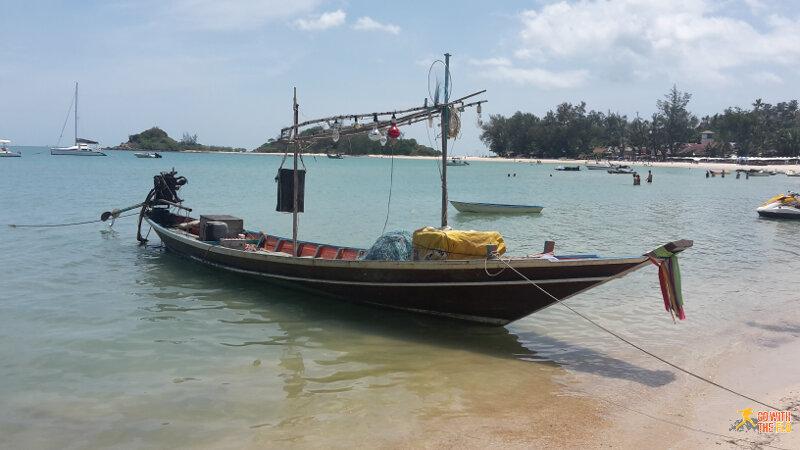 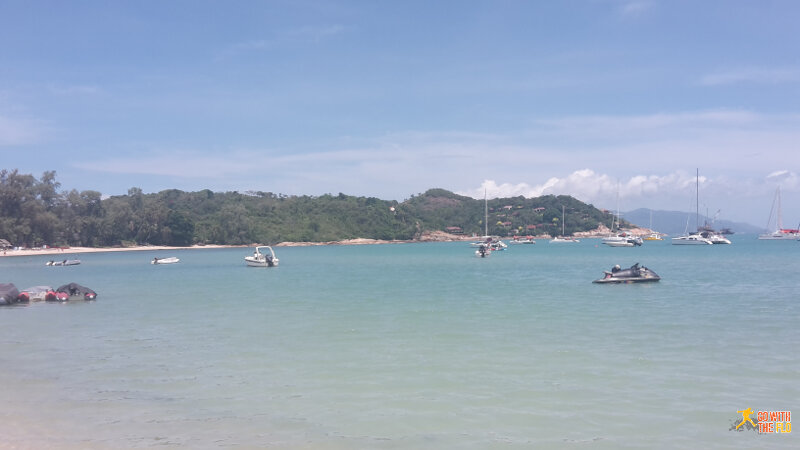 It was interesting to see the difference in prices between an non-touristy beach in Thailand (Rayong Province) and Koh Samui. A coconut for example was more than double the price (50 vs. 120 Baht).

There are a number of watersport activities on offer as well dozens of massage places on the beach.

Saturday evening we went to Chaweng, the main beach. What a disappointment, at least at night. The main street is fully of tailors, massage parlors and not very appetizing restaurants (nothing authentic Thai really). In between are the typical Thai bars with some Thai ladies and lots of elderly farangs. Needless to day, I was not impressed at all. To the extent that it’s not worth showing any photos here.

On a run in the morning, I ran passed Wat Plai Laem and Big Buddha. 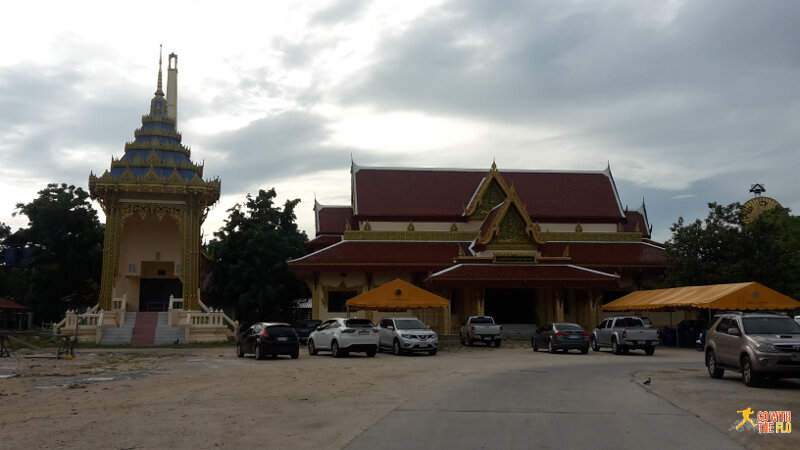 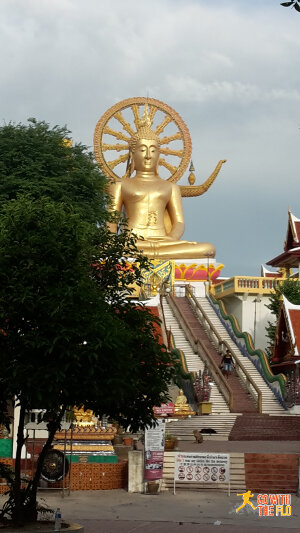 Since it was really just a short weekend away, I spent most of the time at the beach and didn’t really explore the island. Maybe it would be worth hiring a scooter next time.

Flying out of Koh Samui was interesting, as the airport is a bit of a unique concept, with everything being open-air. 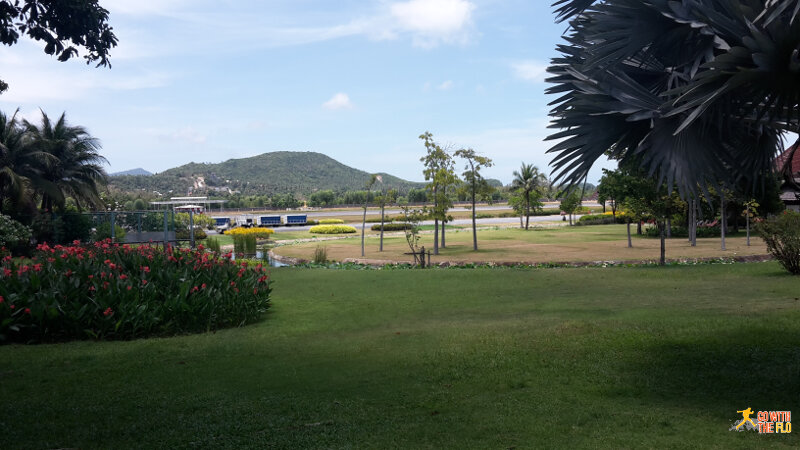 View towards the runway at Koh Samui airport

After check-in, you walk through what reminded me of a US open-air shopping mall. 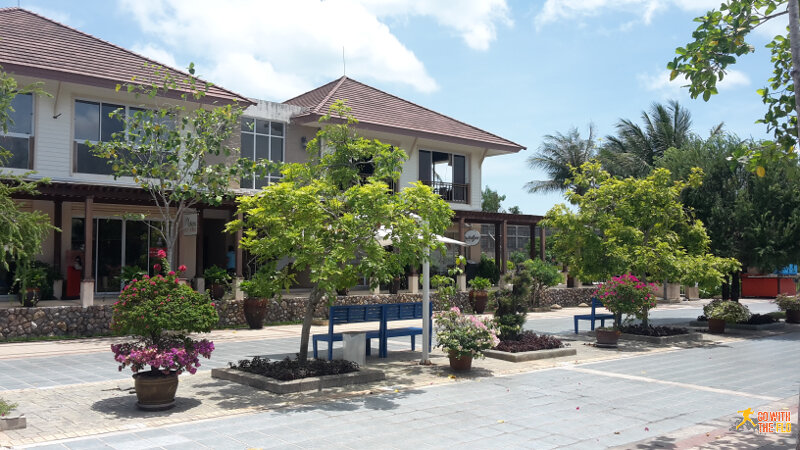 After immigration and security, Bangkok Airways has set-up some courtesy snacks and drinks for its passengers. 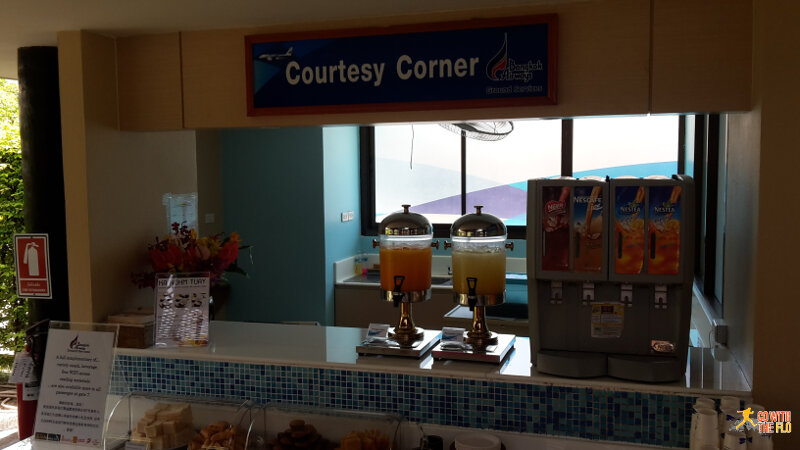 It was pretty funny that the snack shop next to it had to put up big signs that this is “not free”. 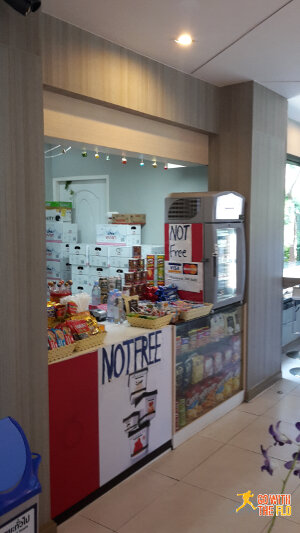 Not a courtesy corner

Traffic at the airport is very boring with almost all flights being operated by Bangkok Airways. I saw one interesting exception though: 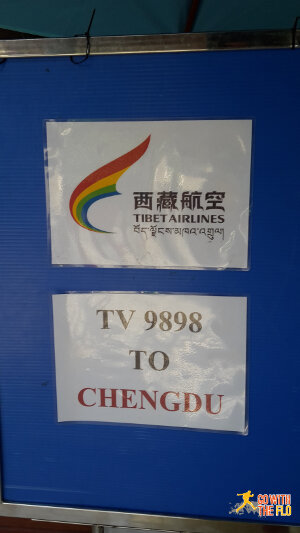 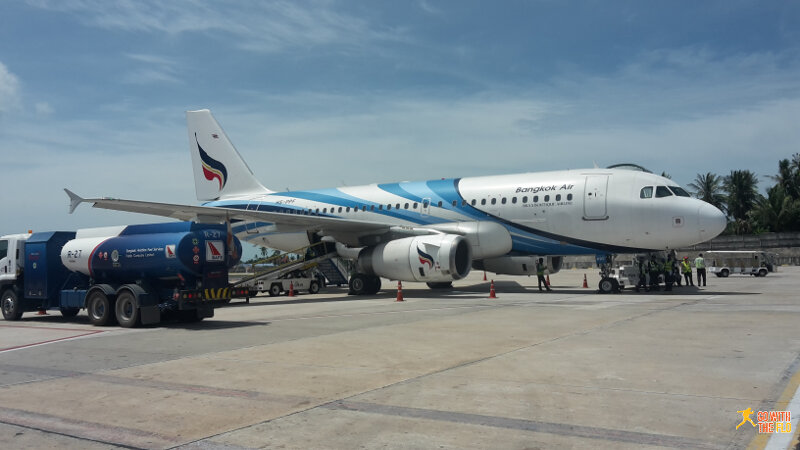 The flight back was uneventful and right on time. 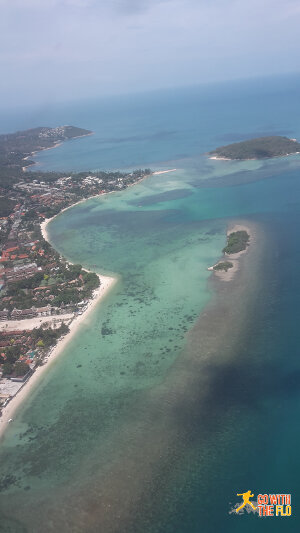 Where would I rank Koh Samui? Well, to be honest I was a bit disappointed (#firstworldproblem). But judging by the price Bangkok Airways charges, I was somehow expecting a bit more of a pristine island maybe? But instead, Koh Samui is full of resorts with nothing left untouched really. It really caters for mass tourism and hence it wasn’t easy to find good authentic local food and you can tell that the locals are very much used to large numbers of foreigners coming to the island. If you are paying full fare, I think there are better beach destinations to fly to our of Singapore.